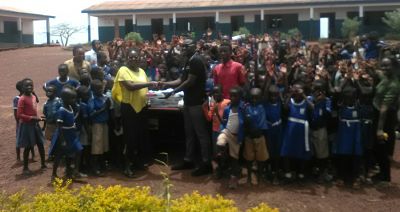 The National Union of Ghana Students (NUGs) Local Chapter of the University of Cape Coast (UCC) has donated 1,510 books to three schools in communities close to the University on Tuesday, April 04, 2017.

According to the Local NUGs President, Mr. Albert Awortwi, the donation exercise was based on a project of the council called Project 18,000 Exercise Books aimed at soliciting books from students of the University and donating the books to schools in communities close to the University to help keep less privileged pupils in school by providing them with some educational materials.

“We realized that being in Cape Coast, there are underprivileged school children with some not even going to school and are seen walking around begging for money. A contributing factor of this is the inability of some parents to get educational materials for their children thus alleviating the plight some parents go through, we decided to embark on this project”, he said.

Mr. Awortwi disclosed that the exercise books donated were solicited from students of the University, and the Hall Presidents of Oguaa, Casely Hayford, Adehye and Atlantic Hall gave 100, 100, 200 and 100 books respectively in the quest to execute the project. The Vice Dean of Students, Dr. Eugene Darteh also donated 360 books.

The various heads of the three schools who benefited from the donation exercise expressed their gratitude to the Local NUGS and called on other cooperate bodies and individuals to come to their aid by supporting them.

”I think this action is in the right direction because most of the pupils in this community are needy and sometimes we teachers would have to support them with food items, sandals, and other items. So I think the actions of the Local NUGS is in the right direction and we call for more of such”, the Head Teacher for St. Anthony Anglican Basic School, Mrs Victoria Quanoon stated.