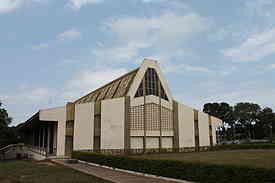 Partitioned LLT To Be Dismantled

The Large Lecture Theatre (LLT) of the University of Cape Coast (UCC) which was partitioned some few months ago will soon be reinstated to its original state.

This decision was taken by the management of the university as a result of the inability to manage the noise that emanates from the partitioned lecture halls during lectures and at the end of some lectures at the divided lecture theatre disturbing classes which are in session at the other division(s).

Complaints had been raised by a number of students with regard to this problem.

At a general assembly meeting held on Tuesday, 7th March, 2017, the SRC President of the university, Mr. Dennis Appiah Ampofo Larbi, reechoed the problems faced by students during lectures at LLT as a result of the partitioning of the lecture hall.

“Noise management at the auditorium is not in shape and as for that matter, while a lecture is ongoing at partition 1, it could be heard in partition 2.”

The SRC President then called on the management of the university to urgently tackle the situation.

The Vice Chancellor of UCC, Prof. Joseph Ampiah Ghartey in a response to the problem raised by the student front, directed that the partitioning of the lecture hall be dismantled.

According to Prof. Ghartey, the decision to partition the LLT was to help solve the issue of inadequate lecture venues on campus, however it turned out to bring up another problem.

“Those who partitioned the place believe they were doing us all a service, both lecturers and students. But that is not our work, so I have asked the director of Development to dismantle the divisions of the partition”, the Vice-Chancellor said.

The VC in proposing a solution to the problem called for the using of other auditoriums on campus for lectures rather than partitioning LLT.

“We have to open up a lot more places for lectures. This auditorium (UCC, Main auditorium) must have a timetable for what happens here and therefore we should combine the use of this auditorium with such activities and lectures. That is possible”, he stated.

He also hinted that the university management is proposing to build a lecture theatre complex which will have 25 classrooms and this will help in curbing the situation of inadequate lecture venues on campus.