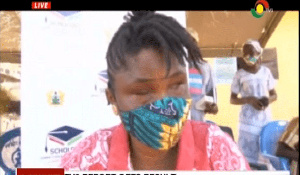 A presidential intervention has earned a level 100 visually impaired student of the University of Cape Coast (UCC) a full scholarship.

Faustina Takyi, whose father disappeared on a fishing voyage 20 years ago, was playing with her friends when one of them bit her eye causing her to lose her eyesight at the age of 13.

Her 60-year-old unemployed mother, Esi has since been the one taking care of her and two other siblings with occasional support from others.

The story of the old woman and Faustina which was told on Mother’s Day on TV3 attracted the attention of many people including President Nana Addo Dankwa Akufo-Addo who ordered the Scholarship Secretariat to offer her a full scholarship.

On May 12 the Municipal chief executive for Mfantiman, Kenneth Kelly Essuman and some officials of the Scholarship Secretariat visited the home of Faustina to announce the offering of the scholarship to her.

Four days later, the team went to the home to officially present the scholarship letter, a laptop and mobile phone to Faustina who hopes to become a teacher.

Her mother was also presented with cash donated by benevolent individuals who were touched by her plight. The money is to enable her start petty trading again.