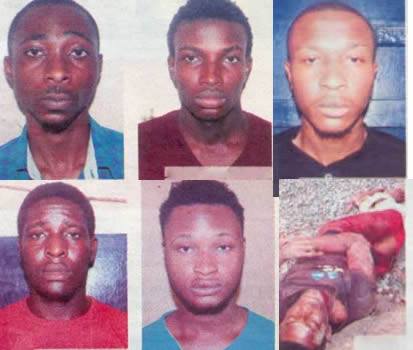 Five Nigerian students accused of murdering their colleague at the University of Cape Coast last year have been freed by the Accra District Magistrate’s Court.

This followed advice by the Attorney General’s Department to the police to cease prosecution because it lacked credible evidence to pursue the case.

The five who are friends of the deceased, Godwin Chukudi Ayogu, were arrested after the body of the deceased was discovered with multiple stabs and both hands and legs tied, throat slashed and intestines gushing out.

Justifying their arrest, Director-General in charge of the Criminal Investigations Department, COP Prosper Agblorh told a media briefing in Accra in April 2014 the deceased had been pursuing one of the suspects, Abayomi, for money the deceased had loaned to him several months before his death.

A day before his death, the deceased was seen in the com¬pany of Abayomi and Tim – ileyin to demand his money. The deceased and one of the other suspects, Brendam were also said to be at logger heads after Brendam attempted snatching the deceased’s girlfriend.

The police also claimed the tyres of the vehicle of one of the five marched with the tyre-marks found at the place the deceased’s body was dumped.

But in the absence of enough evidence, the court has released the five and ordered the police to free the vehicle which had been impounded.

Lawyer Bright Atokoh who is legal counsel for one of the suspects told Joy news’ Joseph Opoku Gakpo they are considering suing the state for damages.

“They should have completed their course of study at UCC but because of this matter they had to repeat… their reputation is at stake…if you google now you will find the story there…and you can see that their names have been published as murder suspects, so there is need for us to clear the air…a suit against the state is possible to repair the damage done to their reputation,” he said.