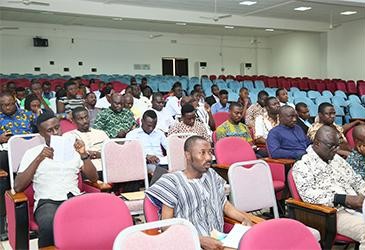 Past students of the School of Agriculture, affectionately called AGRICOLAE, have held a three-day homecoming to map out strategies to make their association vibrant.

The homecoming was also aimed at mobilising alumni to support the development of the School of Agriculture.

The event, themed: “Repositioning School of Agriculture as a Centre of Excellence for Education: Agricolae, served as a networking and socialisation platform which afforded members to relive memories of their school days.

Delivering the keynote address, a former Deputy Minister of Agriculture, Dr. Ahmed Yakubu Alhassan, called for more engagements between the School and past students. A move, he said, would enable the School get support from past students to advance the vision of the School.

Dr. Alhassan asked members of AGRICOLAE to take measures to address the decreasing enrolment in the school and advised students to have different perception about agriculture. He advised past students to be good ambassadors of the School wherever they found themselves. He thanked faculty of the School for inculcating in them values of humility, truth and honesty during their school days.

Dr. Alhassan urged current students of the School to take their studies seriously in order to achieve greater heights in future.

For his part, the Dean of the School, Prof. Elvis Asare-Bediako, thanked the past students for making the maiden home coming a success. He reminded them of their shared responsibility to contribute to their alma mater to make the School a Centre of Excellence. He commended the leadership of the old students for planning the event, which according to him would go a long way to boost the morale of the students.

Prof. Asare-Bediako urged them to share their experiences of the Homecoming to their various year group members who were not able to attend to be present at the 40th anniversary celebration of AGRICOLAE in 2019. He encouraged the current students to join AGRICOLAE immediately they complete school. He told them to emulate the individual efforts of old students, and also endeavour not to turn their back on the School.

the President of the Anglican Technical University College, Prof. Albert A. Addo-Quaye, advised students and parents to discard the notion that BSc. Agriculture was inferior programme and added that there were many prospects for students who pursue such programmes. He urged the past students of the School to give back to the school regardless of their financial standings. “We should give back something to the school. It could be in the form of donation of books, equipment or instituting alumni awards scheme to brilliant students”, he added.

Prof. Addo-Quaye who chaired the function described the theme for the event as timely and charged members of the association to heed to the call by supporting the school in all their endeavours. “Our call is to make sure that we bring something to the school so it can be a center of excellence”, said Prof. Addo-Quaye who is also a past student of the School.

In a short remark, the Member of Parliament for Dormaa West in the Brong Ahafo Region, Ali Maiga Halidu, commended the organisers of the event. He urged the new executives of the association to establish an alumni fund to award scholarships to attract good students to the School.

As part of the programme, deserving students who had excelled academically were presented with certificates.

Some of the activities for the programme included tour to the technology village and farm, special exhibition, Dean’s Ball and Games.

Present at the event was Hon. Sophia Karen Ackuaku, MP for Domeabra Obom Constituency, who is also a past student.