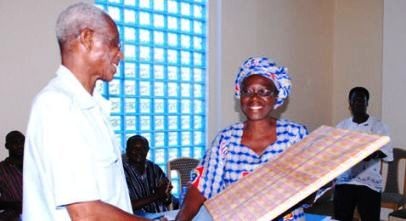 The School of Biological Sciences has honoured a former Acting Vice-Chancellor of UCC (1988-1989), Prof. Kodwo Ndzeba Eyeson for his meritorious contributions to the School at a ceremony held in his honour at the Senior Common Room, North Campus.

Speaking at the function, the Dean of the School of Biological Sciences, Dr. Isaac Galyuon indicated that the School has instituted “Prof. K. N. Eyeson Annual Lecture” to feature eminent scientists across the world to deliver lectures. The first lecture would be held in February 2014. In addition, he stated that an annual “Prof. K. N. Eyeson Prize” of $500 would be offered to the overall best student from the school during the annual congregation of the University.

“In terms of your university career, you rose from the lowest to the highest i.e. from Assistant Lecturer to Full Professor. You coupled this with administration by rising through all the levels to the top position of Vice-Chancellor.

You have put your foot prints on the sand of time in UCC generally and Faculty of Science/School of Biological Sciences in particular. Your commitment to duty is noticeable, admirable and worthy of emulation. Very time conscious, you never rescheduled your lectures/practical activity ever, when you were second in command i.e. Pro-Vice-Chancellor of UCC. You are meticulous in your assessment.

You instituted post-graduate programme in the Department of Zoology. This is an exhibition of nationalism at the highest level because you focused on Ghanaian human capacity building. In teaching, you aimed at academic excellence. You are an accomplished Zoologist. You stand tall among your contemporaries.

Your disposition to life has been constantly kept alive and amiable disposition to the Department of Zoology, Faculty of Science, Department of Human Biology, School of Biological Sciences is worthy of emulation for your tireless dedication, immeasurable impact and valued leadership, the School of Biological Sciences deems it a great blessing to have been associated with you.
Hundreds here present and absent join in saluting you.”

Receiving the plaque, Prof. Eyeson who was full of excitement expressed gratitude to the School for the honours done him and his family. He noted that the annual lecture and the selection of best students in his name must be done to reflect on quality since UCC is a centre of excellence.

The Registrar, Mr. John Kofi Nyan, who was present at the function described Prof. Eyeson as an astute scientist and leader who had immensely contributed to the development of UCC. He recounted the unique relationship between Prof. Eyeson and all level of staff in the University.

The Chairman for the function, Prof. John Blay also described Prof. Eyeson as a versatile because he carved a niche for himself in fisheries. He commended him for his foresight and the indispensable knowledge and skills he impacted in his students adding that “those of us especially lecturers of the School of Biological Sciences who were taught by this great scholar would forever be grateful to him.”

Present at the ceremony were the heads of Department, a cross-section of lecturers and staff of the School.