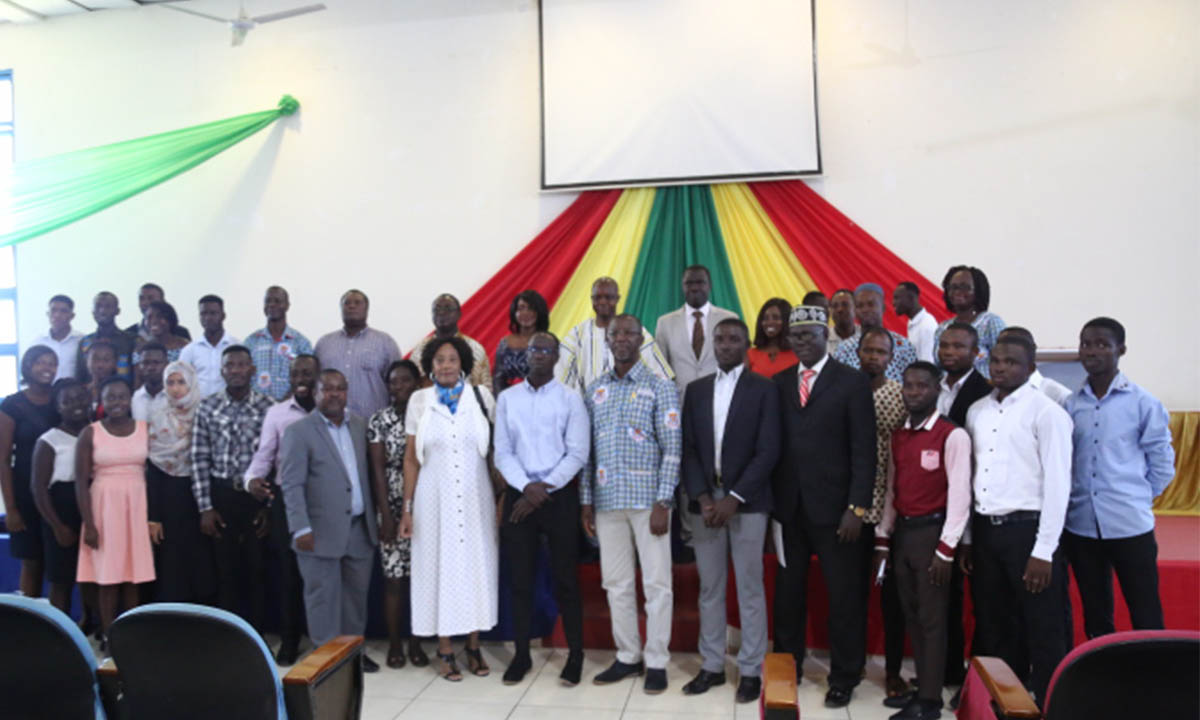 The School of Physical Sciences has held Dean’s Awards Ceremony to honour and motivate its hardworking students for the 2018/2019 academic year.

The Acting Dean of the School, Prof. Ruphino Zugle, in his welcome address, stated that the ceremony was instituted four years ago to honour continuing students who excelled in their programme of study in the previous academic year. He said, “The aim is to encourage such students to work even harder to obtain good classes at the end of their studies.” The Ag. Dean also indicated that the ceremony would also serve as an opportunity to particularly draw the attention of other students in the School to realise their capabilities of achieving greater heights if they would work extra hard in their studies.

According to him, statistics have shown that with the inception of this awards ceremony, the number of students whose Cumulative Grade Point Average have gone above 3.6 has increased significantly. Prof. Zugle, noted that 128 qualified to be awarded, which is a marked improvement as compared to last year, which was 102. He added that the interest of both staff and students in the programme has increased significantly, which could be seen from the appreciable increase in the number of Special Awards from departments and individual lecturers.

Prof. Zugle, who chaired the function, applauded the awardees for their excellent performance and urged them to aspire for greater height. He commended the lecturers and staff for their collective effort, support and hard work towards the development and smooth running of the School. The Ag. Dean said, “While we celebrate academic excellence, some of our students, we need to reflect soberly and find innovative ways to bring up our academically weak students.

The Provost, College of Agriculture and Natural Sciences (CANS), Prof. Moses Jojo Eghan, congratulated the awardees for their hard work and academic excellence. He also encouraged those who were not awarded to work hard, so as to receive prizes in subsequent years. Prof. Eghan charged lecturers in the School to continue to use the appropriate teaching methods to help students understand and earn good grades in their various courses and programmes.

The Provost urged the students to see academic counsellors for counselling and guidance when the need arose. He commended the former Provost of CANS, Prof. Livingstone K. Sam-Amoah and the former Dean, School of Physical Sciences, who is the current Vice-Chancellor of Koforidua Technical University (KTU), Prof. David K. Essumang, for their effort to revive the Dean’s Awards during their leadership.
Citations of honour were presented to the former Provost, CANS, Prof. Livingston K. Sam-Amoah and the former Dean, School of Physical Sciences, Prof. David K. Essumang, current Vice-Chancellor, Cape Coast Technical University (CCTU), Prof. Josuah D. Owusu-Sekyere and former College Finance Officer, who is the current Finance Director, CCTU, Mr. Kwabena Owusu for their immense contribution and support towards the development of both the College and the School.

In all, a total of one hundred and twenty-eight (128) students received awards for academic excellence and remarkable academic performance.
Present at the function were the Ag. Vice Dean, Prof. Emmanuel Essel, the College Registrar, Mrs. Mildred Asmah, lecturers, staff and students of the School.