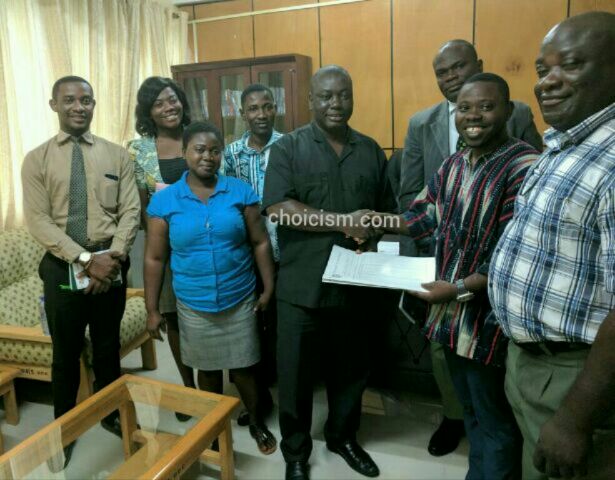 By Editor on October 12, 2017
The leadership of the Students’ Representative Council (SRC) has called on management of the University of Cape Coast to consider the resit policy for students.

In a proposal delivered by some executives of the SRC to the Directorate of Academic Planning and Quality Assurance of the University, the former, outlined some challenges associated with the current resit policy thus the call on management to review the policy.

At a meeting with the head of the Directorate of Academic Planning and Quality Assurance, Prof. J. V. Mensah, on Wednesday, 11th October, 2017, the SRC President, Mr Henry Tony Arthur stated that with reference to the University’s Academic Programmes, Policies and Regulations, first year students have one academic year to pass all registered courses and when the failure amounts to 12 credit hours, the student is dismissed.

“If a first year student fails a course, he has to resit and if he is not able to pass the resit, that is automatic dismissal.”

He added that continuing students who trail a course would have to go through the trouble of being referred back to the failed course by attending lectures, writing quizzes and exams all over again together with the new courses registered by the student.

“A second or third year student who student who fails a course would have to register the course add it to your registered courses go through the processes again, and write End of Semester Exams,” he said.

Based on the challenges raised by the SRC, they made the following suggestions to be considered by the University management:

“1. That if a first year student fails a re-sit paper, he or she be given another opportunity to write until they pass.

2. That first year students be given the opportunity to re-sit till third year, failure of which they can be made fee paying students or be asked to repeat.

3. The first year results be released early enough to inform those who have failed to prepare adequately for re-sit.

4. That extra classes be organized for them to make up for the deficit in knowledge, if any. “

They further proposed that a continuing student who fails an exam should be allowed to resit the exam other than being referred to the course.

The proposal also made reference to other universities such as the University of Ghana and the Kwame Nkrumah University of Science and Technology, where according to the SRC, resit policies are meant to help the students develop over time.

Receiving the proposal from the SRC, Prof. J. V. Mensah explained that the Directorate of Academic Planning and Quality Assurance would have to discuss the proposal with stakeholders of the University including the Academic board of which the Vice-chancellor is the chair, to come to a final decision.

He also added that in reviewing the policy, it would be relevant to look at the positives and negatives of it, such that the quality of education would not be undermined.