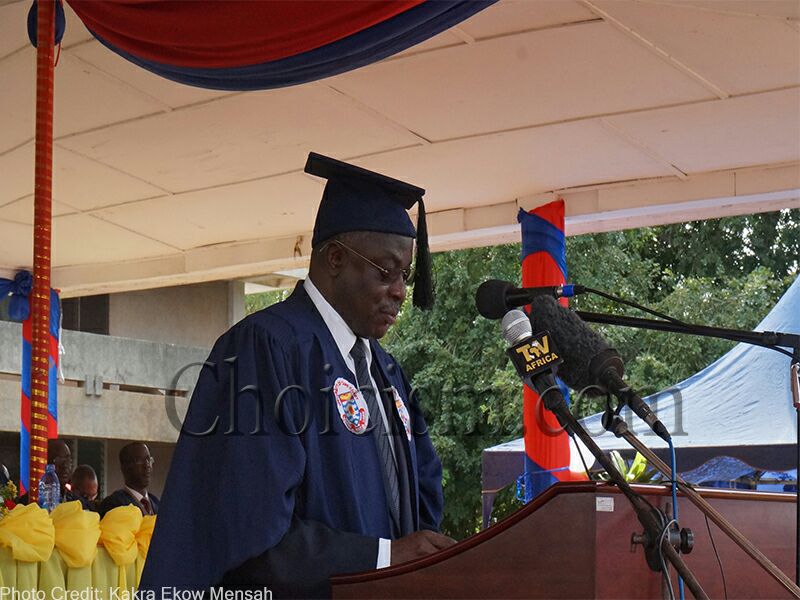 Students’ Handbook Not Meant to Find Faults with Students – VC

The Vice Chancellor of the University of Cape Coast, Professor D. D. Kuupole has stated that the Students’ handbook and the academic programmes, policies and regulations document is not  designed to find faults with students to drive them out of the university.

“The Students’ handbook and the academic programmes, policies and regulations document is not meant to throw out students from the university- far from that”, he said.

The VC reiterated the importance of the Students’ handbook and the academic programmes, policies and regulations document as a means to  make life comfortable  for everyone on campus and also to make them sit up to their responsibilities and monitor their own progress.

“The students’ handbooks are available to guide you to conform to the rules and regulations of the university. Look at them as your second Holy Book”, he indicated.

Professor Kuupole said this at the 2016/2017 matriculation ceremony which was held on Saturday, September 17, 2016  to officially admit a total number of 5,051 fresh students to read various undergraduate and postgraduate programmes in the university.

He further outlined the visions of the university to the matriculants and urged them to conduct themselves in a responsible manner  to fulfill their part in the achievement of the noble vision to help build the positive image of the university.

“The academic environment thrives on discipline and at the end of all your programmes, your worth as a graduate will be determined by your comportment, behaviour and change of mindset, character and orientation. It is your enlightened behaviour that should influence others positively in all respect of life”, he added.

The Vice Chancellor, who  observed that as less people are admitted to pursue the conventional system of university education, the more people are opting for sandwich and distance education, took the opportunity assure the general public that the university is determined to increase it’s postgraduate admission to 20% of total admission in foreseeable future.

The matriculation ceremony saw the Pro- Vice – Chancellor, Professor George K. T. Oduro;  Provosts of the various colleges, and other members of the university Council in attendance.