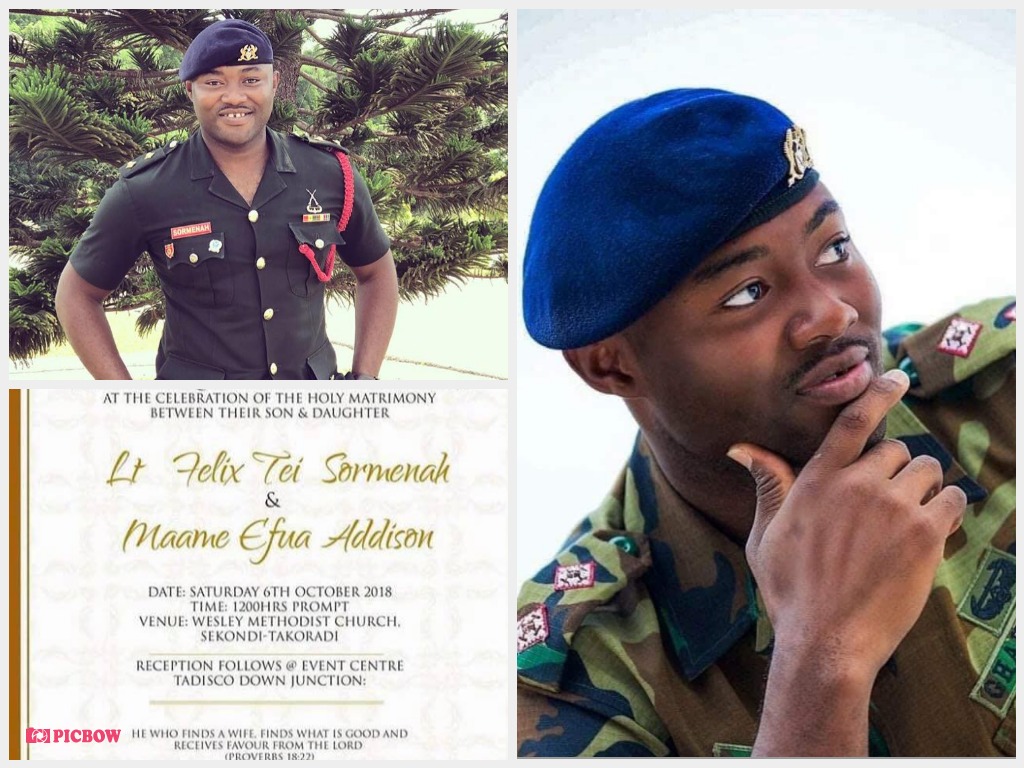 UCC Alumnus dies a month to his wedding

By Abdul-Karim Mohammed Awaf on September 8, 2018

A past student of the University of Cape Coast (UCC), Lieutenant Felix Tei Sormenah is reported dead a month to his wedding.

The soldier, who reportedly died on Friday, September 7, was said to be an affiliate of the Atlantic Hall and was a key figure in many activities of the hall during his days on campus.

Lieutenant Felix Tei Sormenah had been on admission at the hospital but while loved ones prayed for his recovery death rather came calling. Sormenah is said to have been knocked down by a car on September 4. Though the impact was so hard the car’s driving mirror yanked off, the driver failed to stop.

Of more pain is the fact that the handsome-looking Sormenah was set to get married to his fiance, Maame Efua Addison, on October 6.

According to award-winning journalist Mabel Aku Banaseh who shared the news on her Facebook page, the late soldier was a fine brain with a promising future and it is hurting that he is no more.

In a lengthy post on Facebook, Mabel wrote: “I took particular notice of him because he was busy moving up and down to ensure all things go well at my young sister’s wedding reception on April 28, 2018 Lt. Felix Tei Sormenah, a friend of my sister’s husband, was a reflection of what true friendship was on that day It was all joy when he turned up with his fiance at my residence the following day after church service for lunch Lt. Sormenah was billed to marry on October 6, 2018, but something tragic has happened to him He was knocked down by a vehicle.

We were all hoping for his speedy recovery after his surgery so we can witness his big day But alas, my sister called me and delivered the chilling news amidst inconsolable tears This fine young man died today before 12 noon. I feel pained. It hurts to lose such a fine brain with a promising future.

He left behind his sorrowful parents, a grief stricken fiancée, siblings, family members, friends and loved ones. Felix, your friends, loved ones and those of us who barely knew you are heartbroken. God knows why this has happened. His ways are not our ways. I leave you in the hands of the Creator. May you find eternal rest in God’s bosom.

Since Mabel’s post appeared online, many social media users have been expressing their condolences. Vida shared a similar sad experience: Ebenezer could not hold his tears: Edmund was in pain: Raymond offered a prayer for Sormenah’s family: Michael who said he knows Sormenah was shocked: Jerry did not understand why Sormenah should die: Listowell also had a prayer for the family:

We at choicism.com also extend our condolences to his immediate family and all those who are bereaved by his demise.