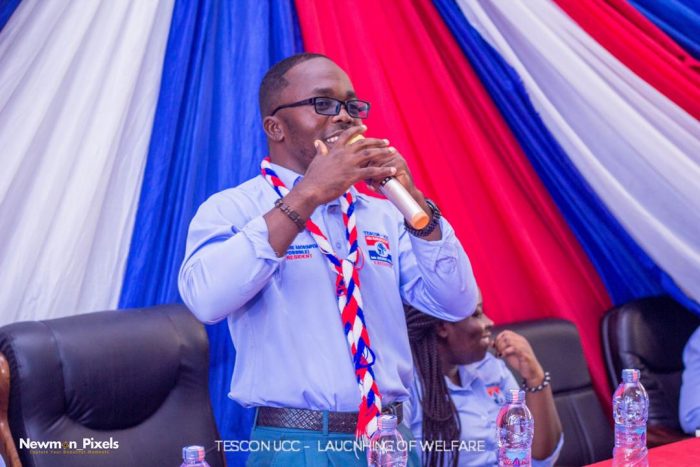 He said the Akufo-Addo-Bawumia-led administration has introduced a lot of social interventions to improve the standard of living of Ghanaians.

Mr. Sackey was addressing members of Tescon-UCC and NPP  sympathizers at the first General Meeting of the second semester of the 2019/20 Academic year at Lecture Theatre 19.

The meeting was aimed at  fostering unity and cohesion to form a formidable front in explaining government’s programmes and policies to students as part of efforts towards victory 2020.

Mr. Sackey implored the students to vote massively for any aspirant who would emerg winner in the Cape Coast North  Parliamentary Primaries to be held in April this year.

The Regional Youth Organiser earlier conveyed the gratitude and felicitations of President Nana Akufo-Addo and the regional executives to all students, especially Tescon members, in the University for their strategic posture which helped to capture power in December 2016.

The Central Regional Tescon Coordinator, Mr. Uriel Ewusi, noted that the Akufo-Addo government had chalked successes in the areas of education, health, employment, agriculture, job creation, among others.

He encouraged students residing outside the Central region to register in the region when the Electoral Commission opens the Voter register and transfer their names to their constituencies, especially the final year students.

He was however quick to add that the students in level 100,200 and 300 could register and vote in the Cape Coast North constituency to save them the hectic time and stress because students will writing exams on the election day.

Mr. Uriah called on students to renew the party’s mandate in this year’s general election.

A former Tescon-UCC President, Mr. Aeron Asiedu Antwi, used the occassion to call on Tescon members to be dedicated to the cause of the party.

He said some old members of Tescon-UCC had benefitted immensely from the government as a result of their loyalty to the party and urged the current crop of Tescon members to work hard, adding that in due course, their efforts would be rewarded.

He told the regional executives to look kindly on the requests by prospective National Service personnel of the party so as to be posted to their places of preference.

For his part, the President of Tescon-UCC, Theodore Abosompem, popularly known as Possible,  urged Ghanaians to vote massively for President Nana Akufo-Addo for him to do more for the country, whilst calling on Ghanaians to reject the change being touted by the largest opposition.

President Abosompem  said any such change would rather derail the progress in Ghana’s economic and social development made in the last   three and a half years since  the NPP was elected to manage the affairs of the country.

He shared his experiences and knowledge gained at the Tescon at 20 programme held in Volta region with  Tescon members.

Other dignitaries at the meeting were

The well attended meeting saw the presence of  Tescon