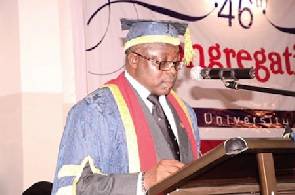 The Vice-Chancellor of the University of Cape Coast (UCC), Prof D.D Kuupole, says the university’s certificates are not for sale.

He has, therefore, warned unscrupulous persons colluding to forge UCC certificates for sale to unemployed persons to desist from the practice and advised employers both locally and abroad to do due diligence to seek the authenticity of these certificates before employing prospective applicants.

Prof. Kuupole was speaking at the sixth session of the 47th congregation of the Institute of Education and College of Distance Education (CODE) of the university, over the weekend.

It was a three-day session during which 10,080 graduates comprising 2,372 from the Institute of Education Studies and 7,708 from the CODE graduated.

He explained that the high demand for UCC graduates had caused some unscrupulous persons to continuously forge the certificates for prospective applicants seeking employment.

He said the university was also working to ensure the sanctity of its certificates, pointing out that, “The issue is a problem both in the country and abroad”.

He said it was obvious that there had been a significant increase in the number of students who successfully completed their programme of study.

Prof. Kuupole said the drop-out rate of students of the CODE had also gone down considerably while the general academic performance had improved considerably.

He, however, advised beneficiaries of the distance education programme to help change the fortunes of particularly, the education sector, and all other sectors in the country where they found themselves, and not only use their certificates to secure higher salaries.

He stated that higher education for teachers in particular, must reflect in a remarkably improved performance in the nation’s educational standards, pointing out that in pursuit of integrating Information, Communications Technology (ICT) in distance learning in the university, the CODE had completed an e-learning platform for use for teaching and learning.

With the full activation of the platform, he said, students could hopefully register, pay fees and access their academic records online.

However, he said, there still remained the poor ICT infrastructure at the regional centres, pointing out that those challenges were being adequately addressed.

On expansion programmes, he stated that UCC through the CODE opened 12 new centres across the country.

He said the sod had also been cut for the construction of two three-storey learning centres in Wa in the Upper West Regionand Zuarungu in the Upper East Region this year.

He advised the graduands to work hard and be honest in all they do to impact positively on the lives of the people in their communities.

In his address, Sir Sam Jonah, Chancellor of the university, noted that distance education was a sure way to acquire higher education and advised the graduands to make the best of the education they had acquired.

At an earlier session, the Minister of Education, Prof Naana Jane Opoku-Agyemang, in a speech read on her behalf, commended UCC for its efforts at digitise its teaching and learning.

Nana Sam Brew Butler, Chairman of the Governing Council of the university also urged the graduates to give back to help develop the university.