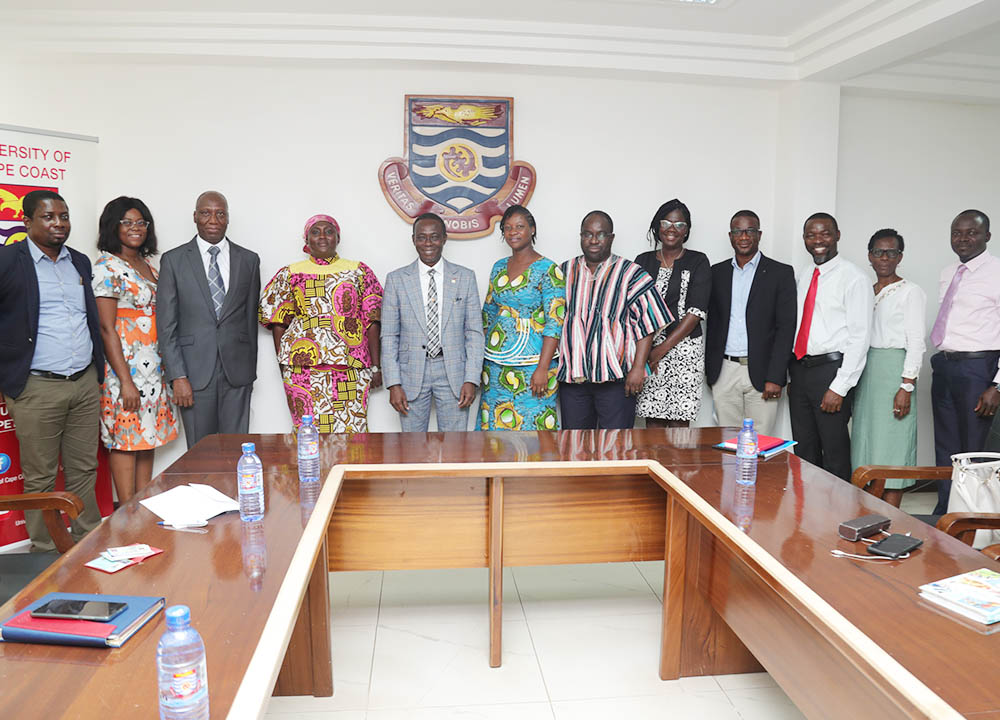 The University has expressed interest to partner with Venture Capital Trust Fund (VCTF) to pursue the entrepreneurship agenda of the University.

The Vice-Chancellor, Prof. Johnson Nyarko Boampong, to pursue the entrepreneurship agenda of the University.

The Vice-Chancellor during his investiture pledged to transform UCC into a world-class entrepreneurial university with a global competitive edge.

It is in this light that the Vice-Chancellor, the Directorate of Research Innovation and Consultancy (DRIC)  and a team from the Business and Entrepreneurship Development team have held a meeting with the General Manager of Venture Capital Trust Fund (VCTF), Ms. Hamdiya Ismaila, to discuss possible collaborations to realise this agenda.

The Director of the DRIC, Prof. Frederick Ato Armah, explained that the engagement was to discuss how VCTF could provide support for the realisation of the entrepreneurship agenda.  He noted that the Vice-Chancellor had set up a committee to craft the Business and Entrepreneurship Development Team Policy for the University.  He stated that “Central to this particular initiative is our quest to partner with private and public organisations that are in allied fields, with the financial means to support the Vice-Chancellor’s vision”.

Ms. Ismaila in her presentation expressed her enthusiasm about the Vice-Chancellor’s vision saying, “I have always felt the need to work with universities because innovation and entrepreneurship start from the universities. The employment situation in the country is just nothing to write home about and I’m happy that you have taken this initiative”.

Ms. Isamaila explained that VCTF was a creation of the Government of Ghana and was purposely set up by law in 2004 but started operating in 2006 to drive a viable capital trust industry. She indicated some activities and the achievements of VCTF included the creation of funds. She said that all Small and Medium Scale Enterprises (SMEs) were eligible to join the fund. She noted that the Fund was willing to partner with UCC to develop ideas that could lead to the creation of businesses for its students and the University itself.

The General Manager of VCTF noted that there were several funds and projects available which the University could take advantage of to achieve its entrepreneurship agenda. She, therefore, urged the University to submit proposals on innovative ideas that could be funded by VCTF.

The Vice-Chancellor, Prof. Johnson Nyarko Boampong reiterated the University’s readiness to seek support in diverse areas to help students set up their own businesses after they complete their studies so that they could also create job opportunities for others. “We will soon be knocking on your doors with our proposals to fund some of the laudable projects we have outlined,” he stated.

The Business and Entrepreneurship Development Team shared their action plans which included festival of ideas, and Venture Challenge for student entrepreneurs to find feasible business ideas.