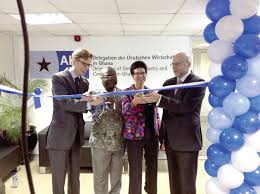 The partnership between the University Of Cape Coast, UCC and some higher institutions of learning in Germany has led to the establishment of a German club in the university.

The club which was launched last week in collaboration with the Goethe institute, Accra, is set  to expand the language proficiency of the students of the university so as to make them multi-lingual.

According to the regional director of Ghana Association of German language, Mr Hayford Anyidoho, who is also a lecturer of German language at the Goethe institute, Accra, he stated, “The German club will give young learners the opportunity to have a taste of the language and motivate them to learn German.”

The launch of the club was part of activities to mark the 5th German Language Day in Ghana which is usually celebrated in Accra, Volta region and Kumasi.

“The German club will help break the language barrier between Ghanaian students and German students who come to UCC for exchange programmes’’ said Dr Florian Carl, a Senior Lecturer of music and dance at UCC.

However, some of the students who were part of the inauguration of the club saw the introduction of German club as a good initiative to the university community and shared their experiences;

According to Angustina- Dansoh, a level 400 students of the Department of French , “I’m happy to be part of this because I love language and I’m excited about the German  club and would entreat everyone  to be a part of the club’’.

Agbenyo Komla Adadzi- Ado, a Music and French student said, “language is important  to every human as we never know where we would find ourselves some days and so I urge everyone especially those learning French to come and be part of the club.”