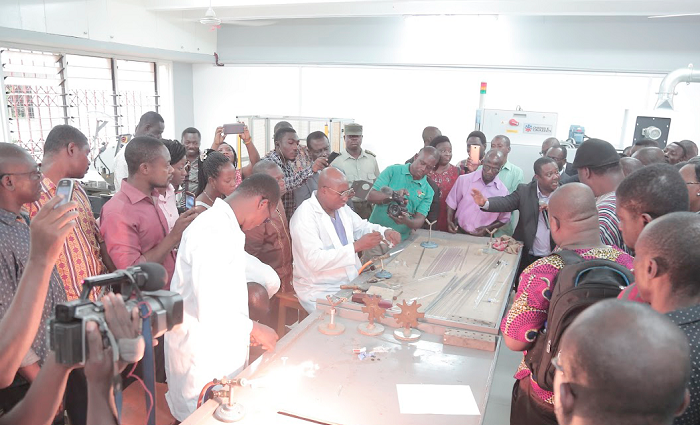 By Editor on July 8, 2017
A three-million-cedi glass blowing unit for the production of test tubes and other glassy laboratory equipment has been inaugurated at the University of Cape Coast.

According to Professor David K. Essuman, the Dean of the School of Physical Sciences, the facility, when operating at full capacity, can produce 2000 burettes, 5000 pipettes and about 10,000 general laboratory test tubes in a month.

The facility, which is under the Department of Research, Innovation and Consultancy of the university, was funded under the Ghana Skills and Technology Development Project (GSTDP) which was implemented by the Council for Technical and Vocational Education and Training (COTVET) with funding from the World Bank and DANIDA and the UCC.

Markets
He said what was important was to ensure that laboratories of the various government institutions bought their equipment from the unit.

He also called for the training of more glass blowers, saying glass blowers were highly scarce and there was no institution currently training them.

The Pro Vice Chancellor of the university, Prof. George Oduro, said the critical role of science education in the country could not be over emphasised, saying the inauguration of the unit demonstrated the university’s capacity in science and research education.

He appealed to the government to pay utmost attention to sicence education, as well as the development of vocational and technical education to accelerate national development efforts.

“One of the focal areas of the project was to enhance the capacity of research institutions to develop technology required by the private sector,” he said.