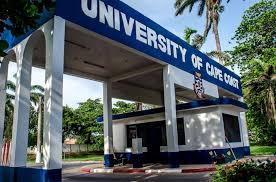 The University of Cape Coast (UCC), in association with the University of Electronic Science and Technology of China (UESTC), has organized the 1st International Symposium on West African Studies (ISWAS) at the School of Medical Sciences Auditorium.

The 1st ISWAS which was on the theme: “Social and Economic Development in West Africa from Global Perspectives”, was co-sponsored by the University of Cape Coast, the American Society for Public Administration (ASPA), USA; and University of Electronic Science and Technology of China (UESTC), Peoples Republic of China.

The Vice Chancellor of UCC, Prof. Joseph Ghartey Ampiah, who chaired the programme, disclosed in his opening remarks that there have been significant contributions from the sponsors of the ISWAS which should be an important factor to ensure the success of it.

He expressed hope that the delegates would make the best out of the programme and also participate fully in all the sessions by exchanging ideas and networking.

Prof. Ampiah also encouraged them to take time to experience the beautiful city of Cape Coast and for that matter Ghana.

The Chairman of the University Council at the UESTC, Prof. Wang Zhiqiang, mentioned that the partnership of some Universities and polytechnics in Ghana and other West African countries has strengthened China -Africa collaborations, enhanced China’s influence in West Africa and also served as a bridge for researchers and practitioners from China, West Africa and beyond to identify and meet the needs of West African development.

He therefore expressed gratitude to UCC and other educational institutions for their collaboration to organize the symposium.

A Principal Researcher at the Centre for West African Studies at UESTC, Prof. Akwasi Osei, who spoke on the topic: “Africa, China and the New Global Dispensation”, stated that the relationship between Africa and China has, for some years now, been very deep and fruitful and has led to even more opportunities.

He indicated that there have been, for the past years, a series of meeting in pursuit of a new type of strategic partnership between the two countries that is intended to promote a win-win economy relationship.

He also advised that Africa should use its resources for the benefit of its people and also pursue people-centered policies.

The symposium provided a platform to award some deserving scholars and practitioners who have presented papers for the 2017 ISWAS that cover various topics with the Best Honorable Mention Paper Awards.

The Centre for West African Studies at the UESTC was established through the platform of the Ministry of Education of China and resources from the partnership and alumni in West Africa.

The establishment of the Centre is in line with the Chinese National Philosophy and Social Sciences’ “Going Global Strategy” with the need to improve the image of UESTC in West African countries.

In attendance were Prof. John McPeak from the Syracuse University, USA; Rector of the Ghana Institute of Management and Public Administration (GIMPA), Prof. Philip Duku Osei among other distinguished personalities.