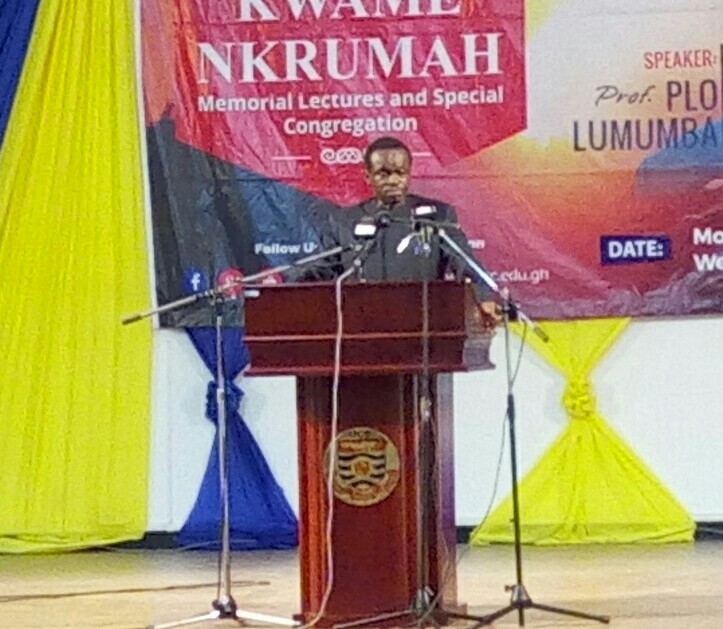 The University of Cape Coast (UCC) has begun its 11th Kwame Nkrumah Memorial Lectures at the university’s Main Auditorium on Monday, September 19,2016.

The 3 day lecture, which is on the theme “Africa Must Rise”, has the Chancellor of University of Cape Coast, Sir Dr. Sam Esson Jonah as its chairman.

The Guest Speaker, Professor P. L.O Lumumba, a renowned professor of Public Law, who spoke on the topic “Political Re-awakening” touched on the history and legacy of the first president of Ghana, Dr. Kwame Nkrumah, whom this lecture is dedicated to.

He reiterated the need for re-awakening African politics while highlighting on the various politics practised in many African countries.

Professor Lumumba, who has strong convictions that Africa has the capacity to change the Continent and even the world, however stated that if Africans do not do anything about their politics, Africa will go nowhere. He therefore encouraged all to do their best to conduct their affairs differently and change their political culture.

He further explained that African politics has a direct effect on her economy and therefore advised that Africans elect the right leaders.

“History has demonstrated times without number that until and unless you get your politics right, you never get it right in your economy”, professor Lumumba said.

He advised that the African electorates must also be educated. This, he believes, will liberate Africa from the kind of politics that has held her down.

He encouraged all leaders to honour Dr. Kwame Nkrumah by doing the things he did and preached.