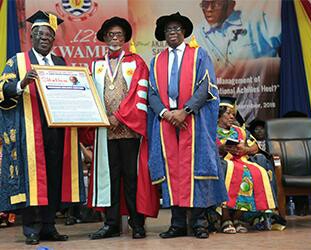 A former Vice-Chancellor of the University of Ghana, Prof. Akilagpa Sawyerr has been conferred with a Degree of Doctor of Letters (D. Litt, Honoris Causa) as part of a Special Congregation held in his honour when he delivered the 12th Kwame Nkrumah Memorial Lecture at the University of Cape Coast (UCC).

The 12th Kwame Nkrumah Memorial Lectures on the theme “Negotiation and Management of Public Agreements: Our national Achilles Heel”. The two-day lecture examined some agreements government of Ghana has entered into with some local and international organisations as well as other countries in three sectors namely, natural resources, national security and energy.

Prof. Sawyer called on government to strengthen negotiation processes to ensure that the nation gains substantially from local and international agreements.

Prof. Sawyerr noted that public agreements, whether conducted by government or on its behalf played a vital role in structuring and management of the national economy and society. “What agreements are made by the state and its agencies, their quality, and how well they are managed are critical to national development of national development and general well-being,” he explained.

He mentioned three main agreements between government of Ghana and Goldfields Ghana Limited 2016; 2018 USA Defence Cooperation and Novation and Amendment of Ameri Agreement as some of the questionable agreements in recent times.

He noted that though the subject matter of the three agreements varies widely from natural resources investments and management, to international security agreements, each illustrated aspects of the inadequacy of technical preparation for entering into public agreements. He noted that the agreements showed limited competence and effectiveness in negotiation, oversight, approval and follow-up of such agreements and mishandling of the fall-out of concluded agreements.

Prof. Sawyerr recommended the need for Ghana to consider the consequences of agreements the state entered into on the development of the country. He asked government to allow qualified professionals to lead negotiations of agreements so that the national interest would be protected. “Without denying the role of political/policy leadership, allow technical people to lead on technical issues that is from engineering, to finance, to law),” he added.

The former Vice-Chancellor stressed on the need to ensure access to a pool of professionals in negotiation skills by encouraging universities to introduce programmes on negotiation skills. He said this would help to build a cadre of seasoned negotiators both in the public service and the private sector.

The former Vice-Chancellor reminded government that it owed a duty to Ghanaians to disclose details of any agreement the state enters into for the public to make informed decisions. He said, as a corrective to such secrecy, some countries like Colombia, United Kingdom, Slovakia and Georgia have adopted the regime of open contracting.

He explained that, “Open contracting seeks to ensure transparency at all stages of contracting: from planning, selection, through procurement and execution to budget, disbursement and corporate disclosure”.

Prof. Sawyerr noted that public disclosure happened in some instances.  However, he noted that “While there are legitimate commercial, national-security, and privacy concerns, they involve a small minority of contracts and can be addressed using a principles-based redaction policy”.

Given the serious consequences of the recent government negotiations, Prof. Sawyerr further recommended “Open Contracting” regime as worthy of investigation and consideration for adoption with appropriate modifications.

The Kwame Nkrumah Memorial Lectures series was instituted by the University of Cape Coast in 1974 and inaugurated in November, 1976 by the First Chancellor of the University, Dr. Archie Casely Hayford.

The lectures are dedicated to the memory of the late First President of the Republic of Ghana, Dr. Kwame Nkrumah.