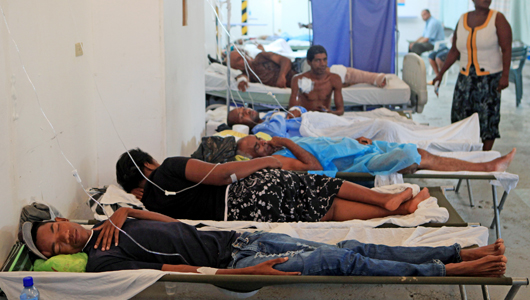 The Directorate of Health Services [DHS], University of Cape Coast (UCC), has cautioned people within the Cape Coast Metropolis to be vigilant as an outbreak of cholera looms.

The caution was given at an emergency meeting with stakeholders of the University following two suspected cases of cholera that was recorded last Saturday.

The meeting was to sensitize stakeholders on the presence of the disease in the vicinity and the need to be vigilant in order to avoid contracting it and reduce its spread.

Speaking in an interview with Starr News, the Director of the University Health Service, Dr. Evans Ekanem revealed that though it is not yet an outbreak, it is important for the directorate to put stringent measures in place to ensure the disease does not spread to other areas of the metropolis.

According to him, since the University is surrounded by various communities hence the need to treat such issues with caution.

He therefore appealed to the public to support their fight in preventing the disease from spreading.

Dr. Evans Ekenam further added that the University is committed to ensuring that cholera becomes a thing of the past most especially within the University of Cape Coast.

The measure, he explained is critical since the disease can spread to other parts of the country in the even of infections especially when students will be vacating soonest thereby moving into their various communities across the country.

He said there is the need to build the capacity of service providers and stakeholders so that the situation does not get out of hands.

Ghana has been experiencing a series of Cholera outbreaks in recent times. In 2014, all regions confirmed cholera outbreak(s) during the year and 130 (60.2%) of districts were affected.

Subsequently, there have been pockets of outbreaks with most recent in 2016 and early part of 2017 affecting Ashanti region, Greater Accra region and Cape Coast Metropolis of Central region.