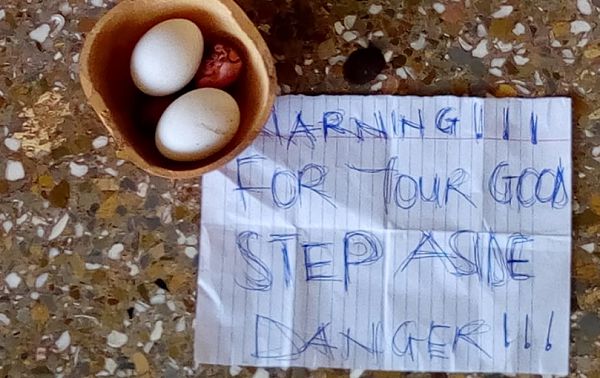 Residents of the SRC Hall of the University of Cape Coast (UCC) woke up last Thursday morning to a scary spectacle of a calabash containing two eggs and kola nuts, with a piece of paper with the inscription: “Warning!!! For your Good, Step Aside. Danger!!!”.

The calabash was positioned at the entrance of the door to the room of one of the aspirants to the position of president of the UCC branch of the National Union of Ghana Students (NUGS).

The development had sent tongues wagging and caused apprehension within the student body.

Some students believed that the items were packaged as juju by one of the students contesting the position of NUGS representative of the hall to brighten his chances of winning.

Many students could not fathom why a student should employ spiritualism in an internal contest.

According to report on sighted by choicism.com there has an uneasy calm among some of the students since the incident as students groups to discuss the incident.

Some of the students said the incident should be treated with the contempt it deserved while others believed that it was a serious development that must be investigated.

When contacted, the Chairman of the SRC Hall, Dr Michael Boakye-Yiadom, confirmed the incident and said an emergency meeting was scheduled for Friday evening to deliberate on the matter.
Views

One aspirant, who did not want his name to be published because of possible reaction from his parents, told the a Daily Graphic reporter that he intended to step down for fear of his life.

Another student, who spoke to the Daily Graphic on condition of anonymity, said it was “surprising and unbelievable that student politics has aggravated to this level such that people have to threaten the lives of their fellow students just because they want to occupy positions.

“I don’t know the aim of these people. I don’t know why they are doing this, but it is only evident that they are eager to occupy a position or an office not necessarily to impact lives or lead people to a positive cause.”

The students were of the view that the ultimate aim of the contestants was perhaps to occupy the position in order to use the office for personal gains.

“If it is not so, why should you threaten the life of a fellow student who is equally contesting the position,” one of the students, who saw the calabash, said.

The eyewitness said all the aspirants were due for medical examinations soon, saying “it is disheartening and threatening for one to wake up to see a calabash with two eggs and kola nuts in it. If I were the one, I wouldn’t know how the day would go for me,” another student said.

He said although there were no facts with which to make deductions or inferences, the act was supposedly carried out to deter the other contestants from contesting.

However, others who spoke to this reporter strongly expressed the view that the incident might have been caused by the affected aspirant himself as a ploy to opt out of the race for fear of the other contestants.

A student who described himself as a traditionalist watered down the incident and said: “No true traditionalist will ever use eggs from the poultry farm as the ones in the calabash appeared to be. Local eggs are always used.”

According to the traditionalist: “The best we can do now is to report the case to the stakeholders of the university and they will have a mature way of approaching it.”