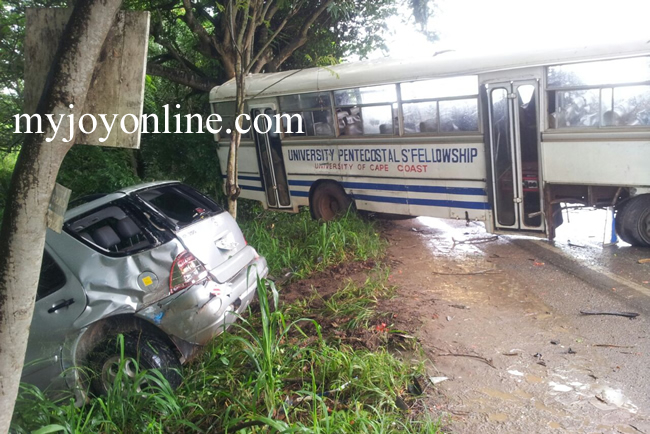 One person has been confirmed dead, another in critical condition following a motor accident on the Cape Coast-Yamoransa road in the Central region.

The injured have been sent to the Cape Coast Teaching Hospital.

The driver of the TATA bus with registration number GW 4109–R, belonging to the University Pentecostals’ Fellowship of the University of Cape Coast, is said to have lost control of the vehicle near the Pedu Junction Sunday noon.

It then started swinging from one side of the road to the other; in the process the bus burst a tyre and ran into an oncoming Sprinter bus GT 3654–15 from the Takoradi direction with nine passengers onboard.

Sensing danger, a Mercedes Benz ML WR 2940–14, also coming from the opposite direction of the TATA bus, parked but unfortunately the bus rammed into it after jamming the Sprinter.

All the victims in the accident including the one who died were in the Sprinter Bus heading towards Cape Coast, Kwadwo Nyarko reports.

The accident, he said caused heavy traffic on the Cape Coast-Yamoransa road for hours.

Head of Central Regional Fire Service, Koku Fiadzo who led his team to evacuate the vehicles advised drivers to be extra careful during the raining season.

Such accidents could be avoided or controlled if drivers apply minimum speed on the roads, he analysed.