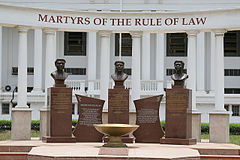 Rumours trickled around that the court issue pending at the Cape Coast High court filed by Philip Glover and Jerald K. Tamba, all students of the University of Cape Coast has been withdrawn but this rumour has been discounted by Jerald K. Tamba.

The case seeks to contest the validity or otherwise of the constitution used by the SRC and has grounded all SRC related elections to a halt.

But within this week, rumours made rounds that the plaintiffs have expressed their disinterest in the matter and have subsequently withdrawn the case, but in an interview with Jerald K. Tamba, he indicated that such rumours are untrue.

He indicated that they have not taken any decision yet to withdraw the matter from court and would continue to press the matter to the latter.

The case is expected to be heard on Friday, April, 24, 2015 and the organization of the SRC election would be dependant on the court’s decision.