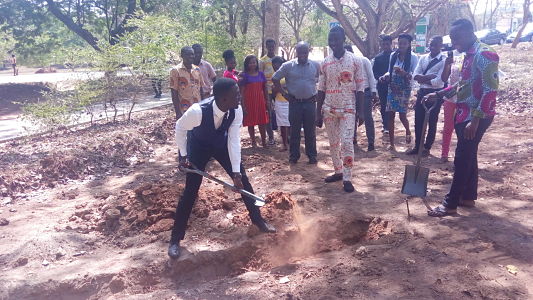 As part of measures to aid students of the University of Cape Coast in their studies, the SRC of the university has cut sod on Thursday, March 30, 2017, for the construction of summer huts on campus.

According to the Maintenance Engineer of the Northern Section, UCC, Engr. Reginald Asibey Ankrah, the project will see the construction of three summer huts on the campus of the university with one close to Casely Hayford Hall, adjacent UniBank at the New Site; one at the SRC Hostel and the other at the Old Site.

He further stated that, this SRC’s initiative is aimed at easing the pressure students face in accessing places to study.

The project according to him is expected to be done within the next one month should all logistics be in place.

Engr. Ankrah added that “we would have to raise a team for the three summer huts to carry the work concurrently so that we will be able to finish the work in a month’s time”.

He again charged the SRC to be on the watch as the project is being executed and asked the council to put before him any challenges or complaints they have with regard to the project.

A number of walkways are expected to be constructed as part of this project with one at the stretch from the Zenith Bank, UCC road towards Sasakawa, which would serve as a path for students plying that route.

The SRC President, Mr. Dennis Appiah Larbi Ampofo expressed gratitude to the projects director, the development officers and everyone who has been supportive to their administration.

Some executives of the SRC were present at the sod cutting.