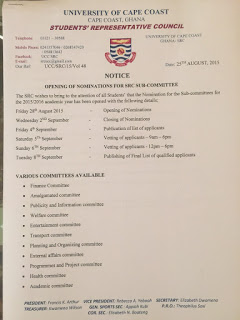 The University of Cape Coast(UCC) Students’ Representative Council (SRC) Friday, opened nominations for interested students to serve under its sub-committees for the 2015/2016 academic year.

The SRC noted among other things that interested students are expected to pick nomination forms at the Porters’ Lodge of all the Traditional Halls and the SRC Office at Old Site.

Additionally, the council indicated that students at the Diaspora are expected to pick forms at the Porters’ lodges of Ayensu Plaza Hostel(Ayensu),Sammy Otoo Hostel (Kwaprow) and Oye Inn Hostel (Science).

It added that nomination forms are FREE for all interested students.

The Timeline for the Nomination of the various Sub-Committees are as follow:

Kindly take a cursory look at the copy of the statement issued by the council and choose one committee you wish to serve for the 2015/16 academic year.