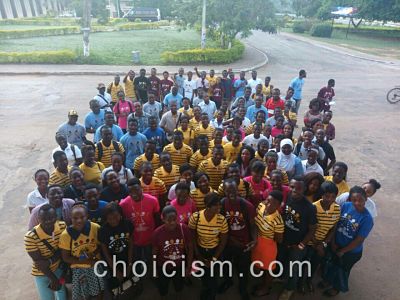 UCC SRC Reaches Out To Communities In C/R

In a bid to encourage volunteerism among students  and also emphasize students’ contribution to society, the University of Cape Coast (UCC) Students’ Representative Council (SRC) has organized an outreach program to some communities in the Central Region to educate people on Malaria, Teenage Pregnancy and HIV/AIDS issues on Saturday, April 22, 2017.

The outreach, which forms part of activities marking the council’s 54th Week Celebration, brought about 120 UCC student volunteers, who received training from the Planned Parenthood Association Ghana (PPAG), Ghana Health Service, UCC Medical School among many other facilitators, to the Saltpond, Biriwa and Moree communities.

In the Moree community, the members of Team Ghartey were put into groups and sent out to interact with the community members on HIV AIDS.

They educated individuals on HIV testing and its benefits, the counseling process, ways of preventing of the disease, and how HIV/AIDS positive persons can overcome stigmatization and also seek help from health officers. They also distributed leaflets that detailed issues on the diseases and condoms to them.

There was a centre where community members were then directed to get tested to know their HIV status.

Speaking to choicism.com, the District HIV coordinator for the Abura/Asebu/Kwamankese (AAK) District Health Directorate, Madam Kate Grimmon-Thompson, lamented how worrying the community members’ unwillingness to check their HIV status and visit the hospital to be put on treatment was.

She however stated that the outreach has provided a medium for members of the community to be informed more about the disease and also get tested.

Madam Grimmon – Thompson therefore expressed her appreciation to the UCC SRC for the initiative saying that “this has brought a number of people here to check their status and also given us the chance to put some on treatment. I am very happy about that and I want this to be done on a regular basis to help the district Health Directorate get at least 90% of the community members know their HIV status”.

This was what some of community members who benefited from the exercise also had to say:

“I was there when your sisters came to invite me. They first talked to me about the disease and its prevention and I was convinced. I had always wanted to get tested but I didn’t get the chance. When I came too I have been treated well. I thank the UCC SRC very much and I ask them to come again. When I leave, I shall also inform others to get tested”, a community member stated in Fante.

At Saltpond, Team Oduro also educated members of the community on malaria, with regard to its causes effects and prevention.

The Assemblyman for Akuadaa Anafu Electoral Area, Saltpond, Hon. Godfred Kusi Clington, expressed gratitude to the team and acknowledged that the exercise would go a long way to help members of the community in curbing malaria.

He added that in other to get the children of the community educated as well on the issue, such teachings should be intensified in the basic schools.

One of the team leaders for Team Oduro, Miss Marian Gyapomaa Gyasi, disclosed that their team noticed persons at the south of the Saltpond were proned to malaria. This was because any time it rains, a lagoon close to the sea get flooded which causes the breeding of mosquitoes in the area.

She added that the exercise organized by the team was a successful one and hopes it would help change the attitudes of members of the community, in the quest to do away with malaria in the community.

The third team, Team Edjah was at Biriwa at the same time and educated members of the Biriwa Community on teenage pregnancy.

The Project Coordinator for the UCC SRC Community Outreach, Mr. P. Y. Asare thanked the volunteers for their participation and cooperation and also encouraged the incoming and subsequent SRC administrations to put in measure to ensure the continuation of the project.

“It is our hope that the incoming SRC administration and the subsequent ones will adopt this noble cause and put in measures to ensure a continuous impact in the region to make us more relevant in society. My sincerest appreciation to all volunteers to devoting time to make this
successful”, he stated.