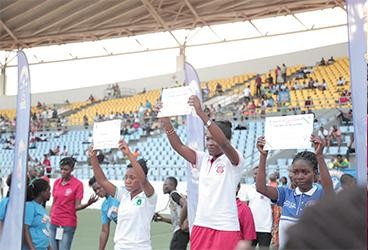 The University of Cape Coast has hosted and won the just ended 7th Mini Ghana Universities Sports Association (GUSA) games with a total of 28 gold, 19 silver and 5 bronze medals.

It was an excitement-filled sports festival for both athletes and officials from eight public universities who congregated at the games village at the Superannuation Hostel at the University of Cape Coast.

The competing universities were, the host institution; University of Cape Coast (UCC), University of Ghana (UG), Kwame Nkrumah University of Science and Technology (KNUST), and the University for Development Studies (UDS).

The kind of friendship  displayed by both sportsmen and women and officials gave the true meaning of what sports is all about. This was made possible by the kind of organization put up by the Local Organising Committee (LOC) under the able chairmanship of the Pro Vice-Chancellor of the host university, UCC, Prof. George Oduro with the utmost support of all members and executives of GUSA led by Prof. Joseph K. Ogah.

Performances put up by athletes from the participating institutions were very high given the fact a lot of new records were set.  Each of the disciplines was keenly contested with the best athletes and teams emerging victors.

It was therefore not surprising that when the President of GUSA, Prof. J. K. Ogah, while addressing the gathering, commended the athletes for their high performances and display of both individual skills and talents during the event.

Prof. Ogah therefore urged them to train hard to represent Ghana at the World Universities games this year at Chinese Taipei (Taiwan) from August 19 to 30.

The GUSA president commended the Local Organising Committee for their hard work, which culminated in a successful event.

Closing the 7th Mini GUSA games, the Vice-Chancellor of the University of Cape Coast, Prof. Joseph Ghartey Ampiah, lauded the athletes for their show of good sportsmanship during the games and applauded all participating universities for their commitment and display of dedication and hard work.

“You have done very well, I am happy to note that each university won at least a medal,” he said.