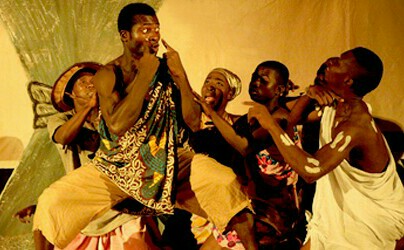 The Department of Theater Arts and Film studies, University of Cape Coast has launched its first theatre and film season of the 2018/2019 academic year.

The Students will thrill patrons with performances from the plays from October 11 to November 17. The plays include; MOTHERS TEARS, THE DILEMA OF A GHOST, THE BROKEN CALABASH, MY CGPA AND GOD AND

THE YOLKLESS EGG.
Speaking at the launch, the head of the department, Rev. Professor Philip Arthur Gborsong commended the Vice Chancellor, Prof. Joseph Ghartey Ampiah, the department and students for their support and contributions. He entreated students to embrace film and theatre as it portrays the Ghanaian culture and identity

According to him, “Technologically advanced countries such as the US, UK and China still have their film and theatre intact; but there is the lack of urgent support for this important area of our heritage. The need for a fresh breed of theatre practitioners to curb the downward movement of theatre within our culture and improve the exciting theatre aspect of our culture cannot be over emphasized”.

He added, “It is important to establish the fact that the aspect of our Ghanaian culture has a huge potential of creating jobs; contributing to the reduction of poverty in our country as well as adding other tremendous benefits.”

Professor Peter Kojo Grant, Vice Dean of the Faculty of Arts, who launched the theatre season applauded the department for its hard work despite the several challenges that confront them. He urged the university community to patronize this year’s theatre season.