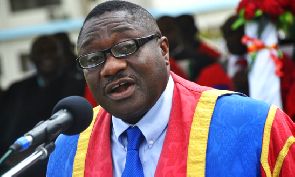 The governing council of the University of Education, Winneba, has dismissed five principal officers of the institution following an emergency meeting on Monday.
One other official has had her appointment terminated.

They were interdicted in July 2017 by the UEW governing council to allow for investigations after it emerged that some vital documents at some offices at the centre of an ongoing investigation had gone missing.

Subsequently, in January 2018, lawyers of the five wrote to the University Council, demanding their immediate reinstatement.

Meanwhile, the Principal at the College of languages, Professor Avea Nsoh, in a Citi News interview described the latest development as unfortunate.

“It is very disturbing indeed. It’s very unfortunate and a tragic loss. I’m hoping that they can fight it back to get what they have been due for over 20 years”.

“I know the Vice-Chancellor is a well-composed person who started from the unit level through all the ranks up to the role of Pro-Vice-Chancellor and then the Vice Chancellor. I know the Finance Officer, he is very prolific. He has a lot of networks. I’ve worked with all of those affected,” he added.

Background
A Winneba High Court in 2017 ordered Professor Mawutor Avoke, to step aside until a case brought against him and the University’s Governing Council is determined.

The order was made in a case brought before the court by one Supi Kofi Kwayera, who insisted that the Vice Chancellor and the Finance Officer, were operating under the institution’s defunct governing council.

This, Mr. Kwayera insisted was unlawful, and hence his legal action against the University of Education, Winneba.

However, before the substantive claims were looked into, the University, through its lawyers, applied to the court to dismiss the suit on the three counts, but the application was dismissed.

The court subsequently ordered the retrieval of all monies paid to the contractors of the North Campus Roads and a forensic audit of the project.