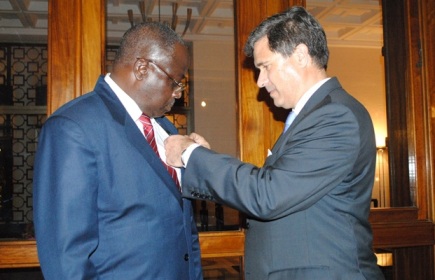 By Editor on June 19, 2013
The Vice-Chancellor, Prof. D. D. Kuupole has received the Officer in the order of “Les Palmes Academiques” by the Republic of France for his positive contributions towards the improvement of Ghana’s educational system.

The ceremony which was held in Accra was part of the first France-Ghana inter-University meeting.

Speaking at the ceremony His Excellency, Mr. Frédéric CLAVIER explained that “the award is one of the oldest and highest academic honours in France which was instituted in the 17th century to recognize distinguished professors in Universities for their remarkable achievement in higher education.”

The ceremony was attended by members of the Diplomatic Corps, Ministers of state, Vice-Chancellors of Public Universities in Ghana and other West African Countries, Representatives of some Universities in France and a section of UCC staff.

In response, Prof. Kuupole, expressed profound gratitude to the French government for the honours and dedicated it to individuals who were struggling to drive the education of Ghana forward. He acknowledged that “though it is a long route and we are going to get there through collaboration and commitment.”

Touching on the teaching of French, Prof. Kuupole indicated the current methods adopted by teachers discourage students from developing interest in the language. He therefore urged the teachers to adopt innovative ways of encouraging students to learn the language. He also called on the government to be committed in promoting the French language since the nation could boost trade and cooperation with its francophone neighbours. He added that “It is an established fact that Ghana is surrounded by Francophone countries and therefore there is the need to go beyond accepting this fact by devoting more effort and resources to promote the teaching and learning of French.”

Below is a citation read by the French Ambassador to Ghana at the ceremony.

“You were trained in Ghana and France (and in the Ivory Coast for a short period) to become the specialist that you are today in applied linguistics. Indeed, after having obtained a degree in French and Education at the University of Cape Coast, you went on to pursue your master’s and doctorate at the University of Besancon in France.

Looking at the list of positions that you have occupied, it is worth noting your consistent loyalty to the University of Cape Coast, where you began as a national service personnel in 1982, which was immediately followed by a post of Associate Researcher. You have continued on to earn more laurels since you were made lecturer in 1989, and then Professor in 2007 following your achievements in teaching and research.

During this period, you were also head of the French Department at your University from 2002, then Vice-Dean and finally Dean of the Faculty of Arts between 2001 and 2009. You were made the Pro-Vice-Chancellor in 2010, a position which you left in September, 2012 to take up your current position as Vice-Chancellor of the University of Cape Coast.

This appointment was undoubtedly in recognition of your consistent commitment to the development and prestige of your university, through your early days as a teacher as well as the great work you have delivered throughout your career. Despite the responsibilities with which you were entrusted, you found the time to be the author of nine books in your field of study and published more than 25 articles. These publications cover the following subjects: Semantics, Socio-linguistic, Analysis of Speech and the Didactics of the teaching of French.

There are also the countless conferences, colloquiums and seminars at which you have participated by bring to bear your knowledgeable contribution. Your influence in this domain has further transcended the national level, where you have taken up issues concerning the African continent altogether, as shown by your numerous travels abroad, not only to a number of African countries but also to Europe and the United States.

I have also mentioned your manner of commitment which is mainly to education. However, your experience has also gone beyond what is largely the domain of higher education. Indeed, you have channeled a part of your energy to the development of rural life, first of all as a member and then President of the Foundation for the Development and Strengthening of Education in Rural Areas. In partnership with the French Cooperation, you became a committee member for the Solidarity Priority Fund Projects which was undertaken here in Ghana.”