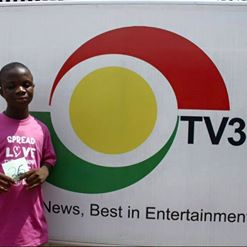 Christian Morgan is one of the best four kids who were auditioned on Thursday at Takoradi in the Western Region for the 8th season of TV3 talent reality show, Talented Kidz.

The 12 year old pupil of the Cape Coast School for the Deaf & Blind in the Central Region was put on stand by after he was auditioned in Accra last year for the previous season.

But Morgan shall be one of the very few pupils living with disabilities who have made it into the show since it started some 8 years ago and hopes to make a difference.

The singer and rapper super amazingly produces beat with his body to accompany performances by slaping his laps and reasonably beating his chest to give that rythm which sways many away.

He is popular for a documentary on a local TV station that showed him – with his two fellow pupils who live with visual impairement – display his talent.

Speaking to the founder and president of SpreadLove, Spencer Kwabena Boateng Mensah indicated that their awesome support for Christian Morgan is in line with the goals of the NGO as they work along the 17 Sustainable Development Goals (SDGs).

The SDGs 4 ensures inclusive equity quality education and promotes life long learning opportunities for all hence he believes ‘the prize of Talented Kidz show coming along with an educational package gives SpreadLove Home & Abroad every reason to push him for it’.

When the show starts to broadcast this February, it will evict contestant(s) every Sunday depending on their performance and public votes (through mobile texting) until the winner of theTen Thousand Ghana Cedi and the Six Thousand Ghana Cedi educational package is declared.

The native of Tarkwa Nsuayem in the Western Region, Christian Morgan would like you to support him win the competition in order to solve the pressing challenges he faces as a pupil with visual impairment.