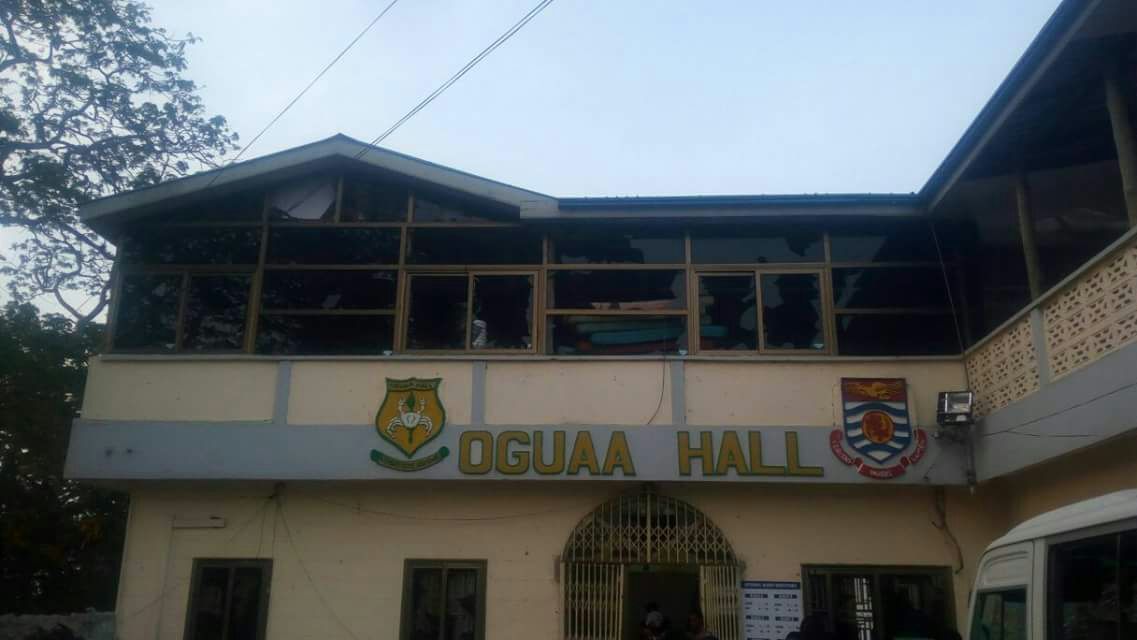 March 17th 2017 was a bloody day at the Southern campus of the University of Cape Coast (UCC) as students from the Commonwealth Hall (Vandal) and Unity Hall (Continental) from the University of Ghana,Legon (UG) and the Kwame Nkrumah University of Science and Technology (KNUST) respectively who came to join Atlantic Hall of UCC to celebrate their 55th Hall week celebration clashed with Hallers from Oguaa Hall.

It took the intervention of the University’s Security Patrol team and some police men who fired gun shots a number of times into the air in order to disperse the students causing the mayhem.

The first attempt by the security however fell on death ears as students from both sides refused to stop and continued to throw stones at each other across the shuttle station at Old Site.

The act caused fear and panic among students as hallers from Oguaa Hall said there weren’t retreating because they were protecting their territory.

It would be recalled that annually when ATL Hall is celebrating their hall week, they invite their partner halls in other Universities to join them celebrate especially during the power night which is always on the Friday of their hall week celebration.

The Vandals, this year however attempted to enter Oguaa Hall but the hallers resisted. After a first fruitless struggle with the hallers of Oguaa to penetrate Oguaa Hall, the Vandal left to ATL. They however staged a comeback minutes later but hallers from Oguaa stood their grounds and fiercely resisted them once more. The second attempt however was what broke the camel’s back.

The Vandals left as though they were going back to ATL but started throwing stones immediately they took cover behind the shuttle station and started throwing stones at Oguaa Hallers to which they retaliated. The act lasted for more than three hours until the security section dispersed them with a threat of opening tear gas on them if they resisted to disperse the place. They however reconvened minutes later.

The situation however took a bloody turn when the Conti students joined the Vandals at ATL. They staged a final comeback and the havoc caused is just unimaginable. Hallers from Oguaa took cover within the hall when the security patrol finally opened tear gas on them. The Vandals, Mariners and Conti took advantage of this and destroyed a lot of things within the hall.

Louvre blades of the hall JCR, plasma TV were broken and the hall notice boards a  at the hall’s entrance has been damaged.

At least two students are reported to have been wounded badly.