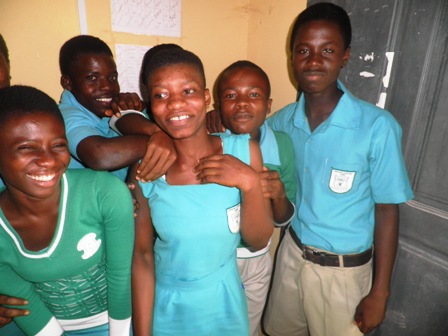 A Year of National Service; A Period of Great Service

It was some few days to September 11, 2012 the day I set off to begin my National Service that I got to know I was posted to a place that sounded familiar. I was posted to Abakrampa Senior High School (aka ABASS) in the Abura-Asebu Kwamankese District Assembly (AAKDA) of the Central Region obviously to teach haven graduated with a BSc. in Mathematics and Statistics from the prestigious University of Cape Coast (UCC).

As an alumnus of UCC, I knew of a place called Abura which was close to the university’s campus and so I was very excited to be virtually living around UCC once again. But to my disappointment, after reaching the Regional National Service Secretariat to begin the routine registrations in order to start my service, I got to know the AAKDA district was a little far away from the UCC campus. In fact, it was about a 40 minutes drive from campus. I said to myself at the moment “At least it’s not too far away from the university”. I have grown to admire UCC and so once I was in the Central Region, I wanted to be close to it.

So many months passed and as I write this piece, I have some few more days to end my service to the nation. I learned a lot, gained much experience and became a more responsible man in the course of my service. I will share some of my experiences with you as patriotic citizen on duty.

Abakrampa (aka ABK), the town in which the school is located may be described by others as a village, but I prefer to call it a small town. It is relatively a rural area. ABK is a town I have fallen in love with not because I was served with bush meat frequently as a teacher (I never saw bush meat being sold or eaten) but partly because it was a quiet, peaceful place and also because it was the first time I was coming close to my childhood experiences after leaving my village some 19 years ago.

After several years, I came in contact with people whose only occupation was peasant farming, I saw hunters carry their long guns on their shoulders, saw women and children bath outside at night among others. I also felt the impact of the chieftaincy institution once again. These are scenes that left an impression on me.

ABK is a small town, so small when you start walking from one end of the town, you will reach the other end in about 5 minutes (I may be exaggerating). Not so many business activities went on in this small town yet there were about 10 places you called buy phone credits. There were 3 chemical shops, a mosque, about 5 churches, one real chop bar and about 4 ‘blue kiosks’.

As an outsider, you could not get the food of your liking especially in the evenings. Those you will get were also short of taste standards. You had to train yourself to eat kenkey (Fante or Ga type), ‘etiwu’ or be your own cook. This was frustrating for me when I first arrived but I quickly adjusted to the situation.

Due to the town’s small nature, an indigene could easily identify you as a teacher even when you are not tucked in. They loved to call teachers ‘Tee’ and will mostly greet you even when the one greeting is far older.

One thing I did not like much was meeting my students in town whenever I left my room. As a young person, my appearance at home made me look just like them and I thought it funny for a teacher and student to be wearing pair of shorts with some ‘chalewote’ at a kenkey joint. Interestingly, I was so close to my students, they made me feel like one of them whenever I met them in town.

Life as a Teacher

I don’t admire the teaching profession much but I do love teaching. I love to profess knowledge concerning a particular subject or topic and so I was honoured to be selected to teach my area of expertise, Mathematics. A subject most students dread yet the single most important subject on this earth (you are allowed to disagree if whatever subject you have in mind does not include Maths).

There were times when students supposedly grasped a particular topic completely yet when a class test was conducted, the modal score was below average. It was disheartening in these situations as it looked like you did not do a good job even when during the lessons they appeared to have understood all that you taught and could answer questions you posed to them.

I fell in ‘love’ with my students despite their poor performance sometimes, which was understandable as it had become clear to me, they had a poor foundation haven attended rural government schools. Whenever school went on recess, I was wishing for a quick resume to meet them once again.

My greatest teaching experience was handling the Form 1 Home Economics class. This was a class of about 90 students who were all females and most of them unwilling to understand Maths. They brought out the patience in me. What I would have caned students in the senior classes for, I allowed it to pass in this class. All this, I did in order that I don’t scare them the more and also, so I will be able to fix their shaky foundation in Mathematics.

In all the classes I taught I always favoured the girls, something I hated my teachers for. I don’t really know why I favour them but it maybe because I now understand the challenges they (girls) face. I learnt a lesson, never judge people until you have been in their shoes.

Did I mention my students nicknamed me? The culprits were all in my senior classes. Some called me Modulo, apparently because it was the first topic I taught them whilst others called me Suhum because I mentioned to them I attended the great Suhum Senior High and Technical School aka Sutesco. I took no offence since we (personally I never engaged in nicknaming my teachers) used to call our teachers names. I remember one of my teachers in Sutesco was called Celine Dion because he talked slowly and softly. Again, I learnt another lesson, what goes round comes around.

My interaction with the permanent staff was healthy. I respected them a great deal. Some of them really love the work they do. My opinion that nobody wants to be a teacher was changed overhere as some exhibited serious commitment to their profession. I will miss them a lot but one thing I will miss most is the daily dose of political debates at the Staff Common Room.

The school had a really disciplined headmaster. Sometimes, I rather wanted to call him a ‘difficult’ headmaster because of his actions. He had a vision for the school and he was hell bent on achieving them. The visions were largely good but in carrying them out he sometimes fell out with some of his staff. I will remember him for his bold and strong stand on issues. I remember once I led my colleague national service persons to his office to negotiate better motivations. (Motivation is some money incentive teachers receive from the school every term). He never seemed to have agreed to my submissions yet he carried out our suggestions. It came as a surprise and we were grateful to him for that. He, Rev. E.D. Kamasa (the headmaster) became a Dr. in the course of my stay thus adding one more title to his name.

My memories of my colleague service persons will be profound. We were a happy family of five. Three Mathematicians (Ebenezer, Eric and myself), a Music teacher (my roommate, Joseph) and a Reverend (Mr. Buabeng). We stuck to each other in the course of our stay and I am sure we will forever remember one another wherever we find ourselves.

It was a great experience for me to have served my country as a core Mathematics Teacher. It is not all hell and suffering for National Service Persons. Sometimes, it is up to you to love what you do.