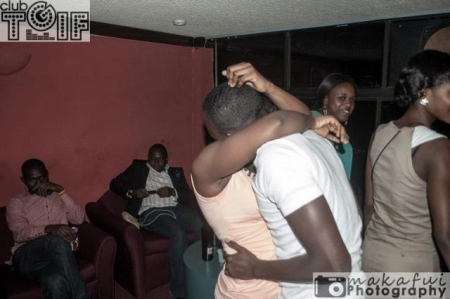 The Way Up is Down

This article is not intended to malign anybody but to look at some happenings around us. I have decided to go blunt and lay bare the issues that stare right into our faces.

Most attitudes and style on exhibition in Africa – mostly in Ghana is an indictment on the moral values of our forefathers. Several recurring attitudes cutting accross fashion, relationships and even religion among other spheres of life have made me reach this conclusion.

Most of the things that might probably be termed oldfashioned in the 80/90’s are the very ones emanating as modern lifesyle. I have realised that most things that we (as kids) used to dislike when given to us by our parents are what we really yearn for today. I stand with the school of thought that’the way up is down’ and I am going to cite some allusions to this fact.

Gone are the days when girls wanted their prospective patners to mount the alter with them before sex. Today, it’s the opposite. Girls want all the sex before marriage. An inetersting thing I have observed is that these girls after the agreement to all the sex, turn and cry victim claiming to have been used by the guys. My question is, don’t guys get used too?

Well, if you’ve not noticed the trend in fashion now, poor you “wati”. The fashion industry has made a massive u-turn to the days when people used to wear patched clothes. (In my JSS days, we used to call it “apatsi – apaatsi”) meaning patched and repatched. People who wore such clothes were mostly the poor. With the current trend, favored with frivolous rather than practical, logical or intellectual reasons and having witnessed people even of much higher standards adorn such clothings with pride and utmost joy of being “latest”, I call this “fashion of the old-fashioned”. (You can find your own name for it if you agree).

One outstanding aspect of fashion that has made a relaspe is the very footwears we wear now. Most of them used to be for old people (especially those that look like the Lofex shoe), but now every guy in his skinny trousers would absolutely love to be in that. What a remarkable relapse.

There was one particular trouser style called “ Tu-nabu” in Ga. It used to be that one particlar trouser that has been worn for a very long time that it got short and found itself hanging above the ankle of the one who wore it. And now for the new trend, people delibrately alterate their trousers to fit their thighs and go hanging above the ankle. They call it “Skinny + hanging”. Funny enough, boys  love it more.

Ostensibly, we have ladies who would love guys with “SIX GOOD PACKS”. Gone are the days when girls loved guys with pot bellies which as it were indicated a sign of richness and good living. Ironically, most of the ladies especially those on university campuses who make a checklist which has “must have a six pack” in it are the very ladies with pot bellies. (If you’ve noticed, dear reader). Hmm, those days guys with six packs were those hunger-strike guys. Well I say to them, keep searching for packs and you will end up with packs of suffering. (No hard feealings)

Did you know of the men’s haircut called “ponk”. Try remembering the last time you went to the barber shop and requested for that style. It used to be one of the most cherised haircuts in the 80/90s which has suffered a major setback with a little rebranding. I know it used to be to the popular haircut for police officers and most people who’s parents were their speacial barbers and most guys hated it and would rather go for “sweat”. Ponk is now “T.I” or whether “2 STEPS OR 3 STEPS” with a little modification.

Gone are the days when people used to attend church and get a sound and soothing sleep  at night after supper. Now, churches get full while night clubs and pubs also get full. It’s a fierce competition.( I fear one day churches will be empty while clubs get full). Even in some cases, we have churches which do not get much congregation while there are no turning points in night clubs. The places of worship demand absolutely nothing for entry, just a pure mind and soul while the night clubs require fees and tickets at great prices for entry.(Can anyone spot the irony?)

There has been a time when most people travelled outside Ghana for better living. It’s here again. There are several numbers of people (especially graduates) who travel outside Ghana for greener pastures coz there are no jobs. What a major setback.

So whether you got a “ponki joo” haircut or you wear the latest “Apatsi – apaatsi” shirt over a “Tu – nabu” trouser or your patner wants to have sex after marriage or you wanna have a guy with a six pack or  you wanna travel outside after graduation, I say stay up your game. Don’t get the night clubs full over the places of worship and as R2BEES says “Keep doing what you do and watch nobody”, I say keep doing the “good things” you do and watch nobody. The Way Up is Down mehn…. (You are allowed to disagree to agree)