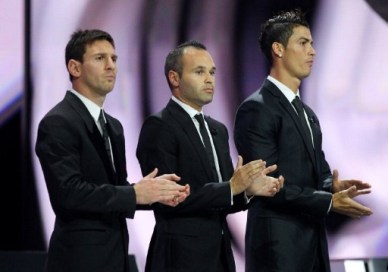 Who Wins the 2012 Ballon D’or? Views from Football Pundits

On the 7th of January 2013, the winner of the 2012 Ballon D’or will be announced. Who will win the award? Will it be Real Madrid’s Cristiano Ronaldo, the magical Andres Iniesta or Barcelona super star, Lionel Messi? This compilation is the ultimate precursor to the piece; “Camera, Lights……..BALLON D’OR 2012”. In this one, football pundits have their say on who wins the Ballon D’or next week.

1. Definitely Messi; not just because of his 91 goals but Messi is a depiction of whatever you expect from a footballer in general and a forward to be specific. From goal scoring to assists to uplift of the whole team. He defines football in simple terms. (Justice Wilson Sey, Arsenal fan)

2. An incredible goal scoring acumen for both club and country last season. 71 goals and 16 assists….and also scored the winner that all but ensured that last season’s La Liga title would go to Real Madrid. The winner witnessed by a world audience of nearly 400 million. I say Ronaldo deserves the award. (Nana Yaw Olalla, Liverpool fan)

3. I think Ronaldo should win it because even though Messi has got us all crazy because of his goals, football is about TEAMWORK hence the award should  go to one who helped his team win something of significant worth….and C. Ro did that (La Liga) and then also did very well with Portugal. (Samuel Koranteng, Manchester United fan)

4. I’ll go with the PUPPET MASTER—Andres Iniesta Lujan. He has been a powerhouse this year…simple and classic example is the Spain vrs China friendly…..he just changed the game in an instance. CR7 and Messi were great but I did not see a high level of PLAY MAKING from them last season. Yes, they had more assist but most games did not revolve around them….simple as that (Fredrick Attieku, Barcelona fan)

5. It’s a close call but I’ll tip Messi ahead of Ronaldo and Iniesta. Messi has been phenomenal. He’s seen more heights in 2012 than the other duo. In terms of personal performance, team contribution, goals, attitude on and off the pitch. It’s a certain Messi’s call. (Kwaku Amoako Foosu-Gyeabour, Manchester United fan)

6. Well, I think Messi should be the clear winner. CR7 and Iniesta are great players and I won’t blame anyone for saying eitherof them should win. Judging them from individual performances, Messi surpassed the two and the memorable one was breaking Gerd Muller’s record. (Emil Alcantara Alexis, Barcelona fan)

8. Iniesta is my personal favourite but this will obviously be between Messi and Ronaldo. Based on individual class alone, Messi take the biscuit (91 goals is hard to ignore) but I believe Ronaldo should win this one. He was enscorcelling in Real Madrid’s La Liga triumph and Champions League campaign. At times he seemed to carry the team on his shoulders, producing fantastic goals when his team was poor. Messi may be ahead in terms of goals and assists but Ronaldo isn’t far off. He also broke a bunch of records. With these two being closely matched, this award should be judged on honours. Ronaldo won a more prestigious trophy than Messi did. Being so influential in that achievement, CR7 deserves the Ballon D’or. (Maxwell Sarkodie, Arsenal fan)

9. I personally think that Ronaldo deserves the gong for leading out his team to La Liga and Super Copa titles. Messi was fantastic with his goals but the award is not for the one that scored ‘most goals’’, but for the individual that made the difference for his team. Messi is more of a striker than Ronaldo, who has to cut in from the wings before he can score; Messi’s goals therefore come as no surprise. Ronaldo stood out in the first of the year but has dipped in the second half, where no trophy is won. He should be recognised for his effort in the first half of the year. (Benjamin Tagoe, Manchester United fan)

10. Messi is going to win because he is doing a massive work with his team Barca and he is also breaking records and making history in football. (Gideon Kofi Nyamekye Leviticus, Chelsea fan)

11. I think Messi deserves it. He had a fantastic year with his goal exploits. We all know Villa, Xavi, Iniesta and the others were not convincing at club level compared to the previous season so he almost single handedly put up a challenge for Barca last season. But for Messi’s goals, Barca would have been in the situation Madrid is in now and this in my opinion questions Ronaldo’s work rate this season as apparently he is their main man and in a way their inspiration. In the beginning of last season to January last year, Messi was clear favourite for this year’s Ballon do’r before Ronaldo started the “Ronaldo Rescue Team” in mid- december to challenge Messi. In my opinion, Barcelona over relied on Messi than Madrid did on Ronaldo. Ronaldo had a fantastic season but Messi outperformed him and was very influential than Ronaldo. If I were to vote, I will pick Messi ahead of the other contenders. (ElPistolero Kusi AnkomahRed)

12. I think Cristiano is favourite and slightly ahead of Messi and Iniesta despite the Argenitne netting his numerous goals in 2012. All major trophies this year have been swept by Ronaldo. He was instrumental in the La Liga title win as well. Ronaldo has also netted 7 goals consecutively against Barca with Messi having only 4 and also struck in both home and away games to send the Super Copa to de Bernabeu. (KaMal, Real Madrid fan)

13. Per my observation over these few years, the FIFA World Player of the Year is award to an integral meber of a trophy winning team. It wouldn’t be bolt from the blue to see Andres Iniesta or Ronaldo bagging home the accolade ahead of Messi. Iniesta won the hearts of many just in the Euros but CR7 displayed his instinctive goal scoring capabilities helping Madrid to the La Liga title. I therefore tip Ronaldo ahead of Iniesta having in mind that most European Best players don’t usually win the award. However, if FIFA should consider player performances only, then clearly Messi stands out tall amongst them all. His record-breaking escapades tells it all (Emmanuel Eghan-Acquah, Manchester United fan)

14. Its time for the Fifa world best player award and unsurprisingly, the 3 finalists are Ronaldo, Iniesta and Messi. Iniesta was fabulous in 2012, helping Spain to a back to back European cup victory, but we all know the award is between Ronaldo and Messi. Messi’s performance has been out of the world this year but i believe Ronaldo should win the award. I believe Cannavaro won the 2006 edition of the award not because of his immense individual stats which is the argument many people raise when citing reasons why Messi should win it, but because he played a major individual role in a winning team. Even with Messi breaking Mueller’s record, let’s not forget that Mueller himself didn’t even win the award during that magnificient season. Why? No major titles. Ronaldo on the other hand was the star of a Madrid team which had many major trophies to its name last season as well as this current one. Would i be surprised if Messi won it? No! But i will prefer the best player on a winning team to win the award. (Marsela Duedu, Chelsea fan)

15. Ronaldo deserves the Ballon D’or because:
Messi’s goal record are both meaningless and dubious. Titles and not records are what matter in football. (Efua Amponsah, Real Madrid fan)

16. All the three finalists proved their worth in 2012 but I think Messi stood out. This is an individual award so I’ll look at his individual performance. I’ll like to divide the year into two halves. I call 2012 a record breaking year for Messi. During the first half, he became the all- time topscorer for Barca. He broke the record for most goals scored in a single CL season (14), most goals in a single domestic league season (50)and the all time record f or most goals scored in a single season (73). His 3 goals in the Copa del Rey helped Barca to win it. His performance in the second half of the year is unparalleled-breaking Muller’s all time record with 91 goals. Goals do not determine who a good player is but separates equally good players. A reason I will place Iniesta 3rd, and CR7 2nd. In all i think Messi has been consistent and deserves it more. (Baray Nabary Daniel, Arsenal fan)

The pundits have spoken and most of them have elected Argentina captain, Lionel Messi as the true heir to the 2012 Ballon D’or throne. Will that be the case on Monday?? Let’s keep our fingers crossed!