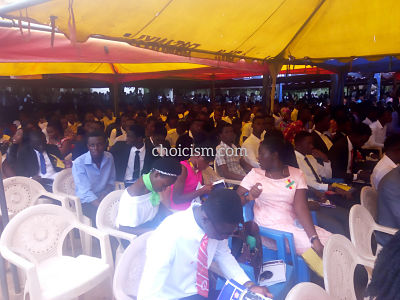 By Editor on September 25, 2017
At a matriculation ceremony held at the University of Cape Coast (UCC) to officially welcome 2017/2018 fresh students into the university, most of the freshshers showed excitement as they were formerly accepted into the university.

Some matriculants in an interview with Choicism.com, expressed joy for finally making it through this stage of their lives and are determined to achieve their goals in this University.

According to some matriculants, they hoped the ceremony would be a “long” one but ended up disappointed as the ceremony was very brief.

“The ceremony was great and I enjoyed it, though I didn’t expect it to be this short” says one student.

Having stayed on the university for over a month now, the excited fresh students also shared their experiences with Choicism.com with regard to some of perceptions they had about the university and the reality on the ground, saying that “campus life isn’t that difficult as many say it.”

“There’s discipline, lecturers come for lectures regularly and on time and even go the extra mile of meeting with us during our free time. Also, they’re lots of facilities in the university which will help us in our studies,” a student said.

The students could not hide their joy at the end of the ceremony as individuals took selfies and others stood in groups to take pictures to commemorate this important day of their lives.

This years matriculation ceremony saw a total of 5,785 students being admitted by the university out of over 13,000 applications received.