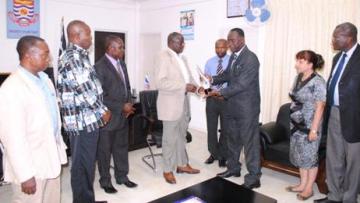 The Dean of the School of Physical Sciences Prof. Samuel Yeboah Mensah, , has been awarded by the National Society of Black Engineers (NSBE), USA, for his massive contributions to science especially in the area of engineering at the 39th Annual Convention held in Indiana.

Prof. Mensah, a specialist in Nanotechnologists is the first African to be honoured with the Academic Leadership award since its inception 39 years ago. In all ten awards were presented to individuals and institutions, mostly from America who have distinguished themselves in the field of Engineering.

Presenting the award to the Vice-Chancellor, Prof. D. D. Kuupole in his office, Prof. Mensah explained that the Annual Convention of the NSBE recognizes excellence among technical professionals, corporate, government, and academic leaders, as well as university and pre-college students. He indicated that the convention serves as a platform to highlight the possibilities that can be cultivated through support and responsibility.

He noted that “I feel humbled and inspired by the award by the NSBE which I least expected.” He expressed the hope that the award would encourage particularly other faculty members, students and generally Ghanaian scientist to aspire to this enviable height.

Receiving the award, the Vice-Chancellor, commended Prof. Mensah and noted that “the award adds to our recognition both locally and internationally as the University of Excellence. In deed this award is a case for others to emulate.” He also expressed the confidence that the award would serve as encouragement to lecturers and students of the School of Physical Sciences, entire staff of UCC, science society of Ghana and even Africa.” He gave the assurance that his effort would be recognized by the university community at a larger platform.

Prof. Kuupole emphasized the need to intensify research by faculty and students noting that “A University without a research agenda is dead.” He finally advised staff and students of UCC to embark on research projects that would impact positively on the development of communities in the nation.