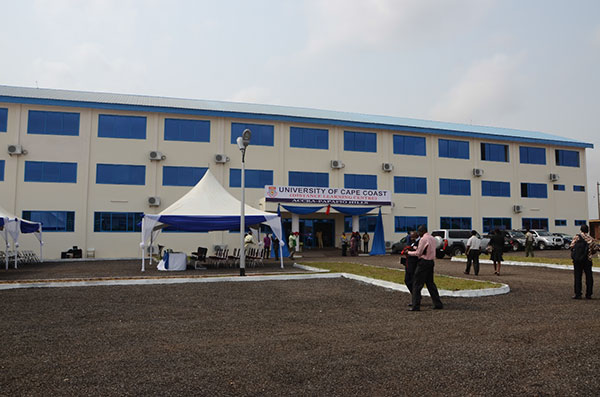 A ceremony has been held to inaugurate a multi-purpose Study Centre for the University of Cape Coast Centre for Continuing Education (CCE) at Mmai Djor in the Adentan Municipal Assembly in Accra.

The 7.5 million Ghana Cedis Accra Study Centre which took almost three years to complete has been in use since the beginning of the 2013/14 academic year has a number of lecture halls, laboratories and offices. It is one of the manycentres to be put up by the university across the 10 regions in the country as part of effort to bring tertiary education to the doorstep of the people.

Speaking at the inauguration, the Vice-Chancellor, Prof. D. D. Kuupole, noted that the Centre had been ungraded to a college status as part of the university’s collegiate system to be rolled out soon to make it vibrant and efficiency oriented. The Vice-Chancellorobservedthat, thiscould only be achieved througha change in attitude and work ethics,saying “If we want to maintain our old ways of doing things, we will not succeed”. He therefore called on all to help the Director of the CCE to in his work and contended that“If he fails, he fails with management”.

Prof. Kuupole called on the centre to look at how it could diversify its programmes to attract more people so that it would not be doing the same things for a long time adding, “You should be thinking of demand driven and tailored-made programmes depending on your resources and time”. He then announced that with time some of the university’s mainstream programmes especially business courses would be run at the Accra centre.

The Vice-Chancellor indicated that the building was a clear demonstration that the university has always put its Internally Generated Funds (IGF) to proper use and not squandered them and therefore commended all who made it possible for the project to be completed even though it was slightly behind schedule.

Welcoming the guests to the function, the Director of the Centre, Prof. George Oduro said the completion of the project was a culmination of visionary and dedicated services that his predecessors have rendered to the university and mother Ghana in the field of Education. He announced that currently similar centres were being built through the IGF at Dominase, near Kumasi, and Nyakrom and also a 55 executive room guest house was under construction at Mmai Djorin the Adentan Municipal Assembly.

A former Vice Chancellor of the university, Very Reverend Prof. Samuel K. Adjepong recounted how the whole distance education programme began and said UCC had always blazed the trail in this endeavour to bring education to the doorstep of Ghanaians.

Very Rev. Adjepong said no tertiary institution in the country, public or private had made such progress in distance education, indicating that the success “has been tremendous” and urged the centre to work hard to become web based. He commended all his successors and those who have worked to put CCE on that high pedestal.