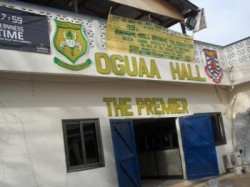 A Recall of Speeches at Oguaa @ 50 Grand Durbar

Barely two weeks after the celebrations of Oguaa hall’s 50th anniversary, choicism.com takes a look at some of the speeches made at the climax of the celebrations, the Grand Durbar.

The immediate past Vice-Chancellor of the University of Cape Coast, Prof. Emmanuel Addow-Obeng who is an old haller and was the chairman of the occasion in his acceptance speech noted that 50 years is a time of reflection, celebration and strategizing to move forward. He then entreated all hallers to be honest in their dealings.

The special guest of honor, Prof. James Ephraim Hawkins who is the Vice-Chancellor of the Catholic University College who recounted his times as a student and a ‘monkey’ advised the students gathered by saying “Life is not straight forward but the future belongs to those who are consistent”.

Talking on the heritage of the hall, he said that Oguaa hall has a natural heritage with regards to the structure of the hall. He acknowledged that the hall had been able to turn her lemons into lemonade.

The hall master, Dr Koaw Edjah in his speech talked about the significant changes that have so far taken place in the hall. He disclosed about plans to upgrade the hall library to promote academic excellence.