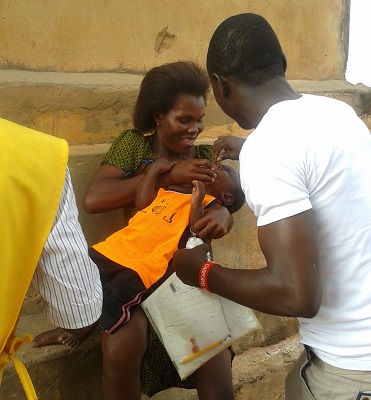 This program was undertaken to immunize children from 0 to 59 months against the Polio disease alongside the administration of vitamin A to those from 6 to 59 months.Members of Patriots Ghana UCC chapter which was led by the President Douglas Opoku Agyeman, Charles Baah, Godwin Acquah, Gerald Okine and Francis Cudjoe volunteered in this exercise.

The members were  taken through a short training on how to fill the tally sheet when a child is immunized.Other training included how many drops of the Polio vaccine should be given, which was two(2),marking of the houses (Y2) which showed that the kids of that particular house have been immunized. If all the children in a house were not immunized, you mark the house Y2 without circling it and marking of the small left finger of the child black to show that he or she has been immunized. Madam Elizabeth Ban-Doodu was the one in charge of this exercise.

After the short training,members of the Patriots team together with other volunteers were grouped into teams and each team had his or her own vaccinator(team leader). These teams were assigned to particular communities and schools.Members of Patriots Ghana were in the teams 4 and 9 and were assigned to Anafo and Emissa Etwere respectively. Both teams went to their various communities to immunize.

On the first day we went to houses and schools where some of the members did the recording,others gave the vaccine drops (both the Polio and Vitamin A) and others educated the parents on the essence of the immunization process.On the first and second day, we closed from at 5pm and were able to immunize 979 children on the first day and 568 on the second day. But on the last day, we immunized only 90 children just because most of them were immunized on the first and second day.During the process of the activity, a team from the national level came to inspect the work we did and gave their comments on our tally sheet. We closed at 3:30pm and we all reported at the Health Directorate. It was such a great experience volunteering in this exercise. Even though most of the parents were ignorant of the essence of immunizing their kids to prevent their kids from getting Poliomelytis.Some had the believe that their children will get sick if they are immunized.Even though we were able to educate some of the parents and some allowed the team to immunize their kids but some did not allow us..

I will use this opportunity to recommend to the Ministry of Health to organize outreach programs to educate parents(especially of rural areas) whenever such exercise is about to start before they embark on it. Apart from that it was a great experience and we members of Patriots Ghana feel very proud contributing to the development of our nation.