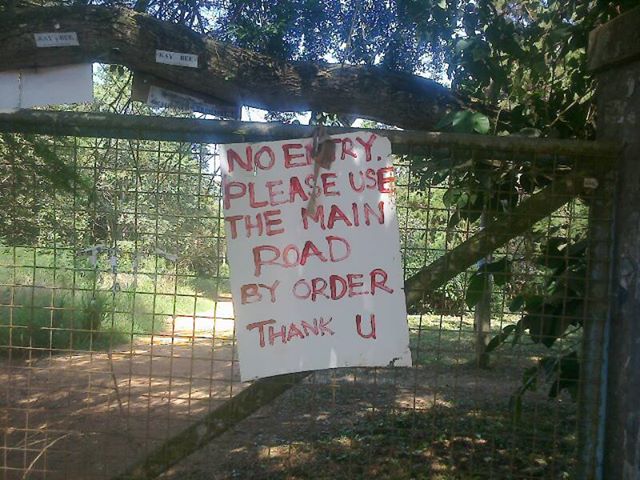 Science & Valco Gardens Closure: One of ‘The Signs of the Endtime’ or Sign of Good Leadership?

I chanced on a headline that read “UCC Parliament Brainstorm on the Closure of Science Garden gate”. I read the body of the article quickly and laughed it off. “Brainstorming” according to the Wikipedia free encyclopedia, “is a group or individual technique by which efforts are made to find a conclusion for a specific problem by gathering a list of ideas spontaneously contributed by its member(s).”

In the first place the closure of the GARDEN is not a problem. It is a solution to a problem which was the inappropriate use of the premises. So if the UCC Parliament seeks to find a conclusive solution to any problem it should clap for the school’s leadership for closing the gardens to picnic goers and prayer campers as well as pedestrians. So in any case, I don’t think what the reporter of the news house that published that article gave an appropriate description what he/she witnessed at the “UCC Parliament”.

Later I heard ‘rumours’ that some students had started peddling around an illusion that there is an orchestration to stifle Christian prayer life on Campus. I laughed that too off. IT IS RIDICULOUS!
As a Christian I have come to realize that Christians in Ghana (Africa) are prone to picking up the consequences of our gross irresponsibility as ‘SIGNS OF THE ENDTIMES’. That might probably give you a picture of a dog chasing its tail by twisting its body frantically.

For example, the garden behind the Science Faculty block (University of Cape Coast) and the one at the ‘VALCO GATE’ are Science research gardens or that was the original purpose, and not PRAYER GROOVES. Over the years, due to leadership lapses on the part of the University these gardens have been ran down by human activities and the NUMEROUS Christian denominations and fellows are to blame too for the destruction of these facilities. Many Churches in Cape Coast started from the ‘VALCO GARDEN’ as weekend prayer fellowships. So I am not necessarily referring to only those on Campus. This is against the background that all recognized religious bodies with presence on campus have been assigned official meeting places by the school. So it is not like the BIBLE is not being entertained in the school or being kicked out. Or there is a desperate attempt by any person or group of persons to stifle Christian prayers. I will urge the church/Christians to focus on living out what the Bible says and projecting God and not waste time noosing around to find out who is against the Church or for the Church… “If thou doest well, shalt thou not be accepted?” [Genesis 4:7 (KJV)]

We have left these places and destroyed the gardens in the name of JESUS and PRAYER. The have same students turn to complain about the unavailability of facilities for research and studies. Thank God, the new leadership of the university has sat up and seeks to get some of these anomalies corrected. SIGNS OF GOOD LEADERSHIP AND NOT SIGNS OF THE END TIMES!

But the Christian community on campus or a portion of it and some of our ever gullible young student politicians are frantically making religious and political capital of such laudable measure and are demonising the authorities. I feel ashamed at the behavior of both entities because I have been involved with student leadership and I am a Christian. I was the president of the NATIONAL UNION OF GHANA STUDENTS (NUGS), UCC for the 2010-2011 academic year and an immediate past Senator of the GRADUATE STUDENTS’ ASSOCIATION OF GHANA (GRASAG), UCC and National. I was also the Public Relations Officer of the NATIONAL PRAYER FOUNDATION (NPF), UCC and part of the NATIONAL INTERCESORS’ ASSEMBLY (NIA). So I am speaking as not an outsider but as an insider who does not seek to undermine neither the position of the Church nor that of the student leaders.

If the various Christian groups (especially the ‘Freelance Religious Entrepreneurs’) who collected offerings at their meetings in the garden had exhibited the WISDOM OF GOD by contributing to developing the places will they have been kicked out? Couldn’t we have injected some of our monies into maintaining the gardens for primary purpose (research) and built small ‘spots’  within with  walkways for our prayer meetings so that we could pray there without trampling over the flowers and plants there? What if we had taken up the sanitation of those places on ourselves and ensured cleanliness there? Wisdom teaches that to gain control over something, you must first show responsibility by investing into. So If the churches had fenced the gardens, traversed them with walkways and demarcated ‘spots’ for prayer meetings, tendered flowers and controlled/moderated human activities there I do not think anyone could think of barring them from using the places.

If you need a GARDEN to pray in you either create one or maintain the ‘borrowed’ not. You don’t run it down.

They have been barricaded and I support it and would not mind volunteering as guard to enforce it. Let us not behave like Jesus going to pray in a Garden means praying in a Garden is a pious act to be followed as a law (even when the garden is not ours).We can still pray on the roads at night when traffic is down or in our rooms. The CASFORD FIELD is not fenced yet and we have a ‘HOUSE OF PRAYER’ at Old site. The University Interdenominational Church and Catholic chapels are also there. Better still let’s pray in our rooms.

The argument of the ’diasporan’ students is that the ‘SCIENCE GARDEN’ was the only ‘short-cut’ to and from their hostels. I think as students we have better things to agitate about. For instance, we can start agitating about the internet connectivity that we pay for but hardly get to use.

We are crying over leadership weakness as one a primary ban on our development in Africa so let us not be irresponsibly antagonistic in our relationship with the established leaderships. It is only when we ‘citizens’ are acting responsibly that we can hold our leaders accountable. In this light I think the student leadership and the church have been well and I would urge we continue in doing so.