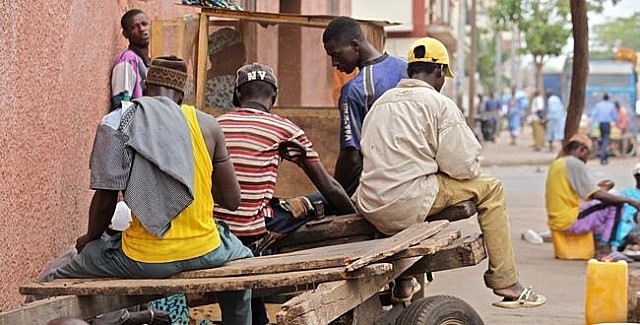 Why are We Still Jobless?

Over the past 12years which have seen three different governments in the country, the major problem that has been talked about most is inadequate jobs in the country. Graduates have been the most complainants of unemployment.

Unemployment (Joblessness) occurs when people are without jobs and actively seeking work. Graduate unemployment is unemployment among people with academic degree.

Unemployment is increasing rapidly world-wide and recently recorded a record-breaking figure of 81million unemployed youth at the end of 2009. This figure was given by the International Labour Organisation (ILO) in the latest UN World Youth Report launched on 6thFebruary, 2012.

According to a recent report by the ILO in January, 2013, world unemployment could hit another world record figure this year and continue rising until 2017. It is no surprise that Ghana is also facing the problem of unemployment. The Greater Region, for example, has an unemployment rate of 13.4% of 1,377,903 people who are economically active in the region.

One may blame some employees precisely those in their retiring ages (above 60years) for his joblessness. Some of the workers in both private and public sectors are in their 60s and late 50s.They have little strength to work unlike they used to have in their youthful days.

It is argued that they are not ready to retire or even step down for people to take their places. Some of them are even calling for the age of retirement to be moved to 70years. Clearly, they are refusing to go on pension a common opinion held by many.

Mrs Matilda Akonnor, a public health nurse, in sharing the sentiments of the unemployed youths in the country said that “our leaders are not ready to go on retirement for the youth to take their places.”

To some extent, the above claim carries some element of truth in it. Some of these “retired people” are still there because the nation needs their service. They might lack the strength but their expertises are exceptional. A good example is Nathaniel Otoo, Director Administration at National Health Insurance Authority (NHIA). Mr. Otoo is in his retiring age but remains at NHIA because the nation still needs his services. In his case, he is there because the nation needs him. His successor has not been found despite people applying his position and this is due to the fact that “quality is better than quantity” and quality has not been found for now.

Pride has made us jobless. We fill too big to take up certain jobs. We also end up looking down upon these jobs. In most cases, we end up displaying our immaturity and ignorance of these jobs. These jobs might be either the best or even the last option available for us but we might not realise since we feel bigger than these jobs. Even if we do get the jobs we want, we do loose them because of our pride. We make demands like higher ranks and salaries which we won’t be given. When this happens, we let go these jobs thinking with our qualification, we will get a better one. And if we don’t get any, we become jobless.

In working towards making our dreams a reality, we have to be prepared to start from somewhere (legal) even from where we don’t want to be. A journey of 1000miles begins with a step. So we have to start from somewhere before we get to where we want to be. Most University graduates want to sit in an office filled with air-condition, drive in a car, and live in a mansion after completing school. White-collar jobs are what most graduate want. It is not surprising that there are about 100000 unemployed graduates in the country. In a press statement by the UGAG on 25th September, 2012, the spokesperson, Desmond Biney, revealed that there are 88,000 unemployed graduates in the country.

In the same press statement, the association threatened national peace. “It was with a sense of call to duty that we, between 30th August and5th September,2012 embarked on a nationwide tour to all regions to register new members and mobilise all unemployed graduates towards the staging of a massive demonstration in the coming weeks to register our displeasure with the current order”. They are not even shy as they have established an Unemployed Graduates Association of Ghana (UGAG). They are not prepared to start from somewhere before they make their dreams a reality.

There are jobs in the country that are very lucrative than white-collar jobs. They have neglected these jobs because of false hopes and their “degrees”. The commercial cab (taxi) business is one of these lucrative jobs but no one is prepared to be called “taxi driver” because he or she is a graduate. A taxi driver makes a daily sale of 100GHcedis to 150GHcedis minus petrol and food. Looking at this, the taxi driver earns, if not more than, 3000GHcedis a month. How many white collar jobs in the country will earn you such amount in a month?

We can create our own jobs if we are not getting one. We have to accept the fact that there is a difference between a job and a profession. Your job is what earns you money and your profession is what you are trained for. For example, the President of the Ghana Football Association (GFA) is a banker and a lawyer but his job is the president of the GFA.

When we accept this fact, we can create our own job or even take any job and be proud of it. There are graduates selling second-hand clothes in Kantamanto and they are making a lot of money out of it. Their fellow graduates who are unemployed and also make fun of this business go to them for help. People have created their own jobs by selling pastries, second-hand clothes, and water tomention but a few. They have made a lot out of it and fulfilled their dreams in the process.

When we see people in their luxury, we want to be like them but we forget that they started from somewhere before they got to where they are today. A man started with his bag as his office andlater his car boot. But today, he has three offices, a printing press and owns one of the fastest selling newspapers in the country.

The greater heights that great men reached did not take them a sudden flight.