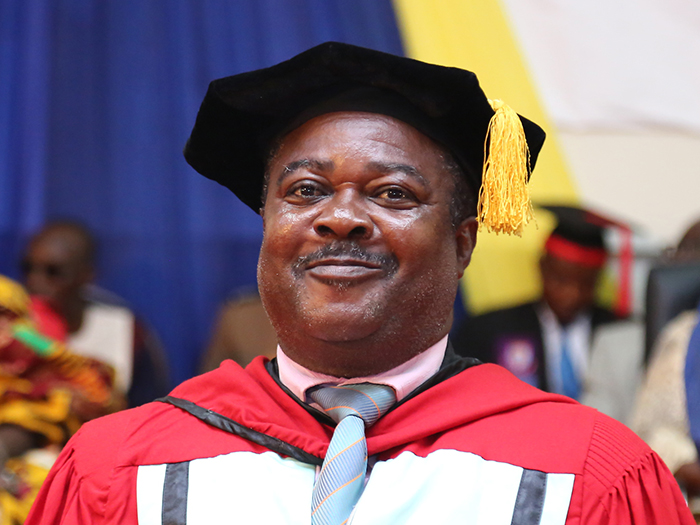 The Dean of the School of Physical Sciences, Prof. David Kofi Essumang has been appointed the Vice-Chancellor of Koforidua Technical University (KTU).

Prof. Essumang is a Professor of Environmental Chemistry at the Department of Chemistry, University of Cape Coast and where he is also an alumnus. He has researched extensively on the environmental pollution situation in Ghana. Most of his research has focused on marine, sediments, soil, mining, urban air quality, indoor air, biota and surface water environments.

Prof. Essumang holds a Doctor of Philosophy (PhD) in Environmental Chemistry from the Aalborg University of Denmark and a Master of Philosophy (M. Phil) in Chemistry, as well as B.Sc in Chemistry and Diploma in Education from the University of Cape Coast. He had his secondary school education at Agona Nsaba Presbyterian Secondary School and St. Augustine’s College, Cape Coast for the ‘O’ and ‘A’ Level Certificates respectively.

Prof. Essumang has published over 80 peer reviewed articles in over 50 different journals all over the world. At UCC, he is the most cited on SCOPUS database and the second most cited by Google Scholar. He has written over twenty study modules for the UCC Distance Education Programme. He has attended several conferences where he has made several presentations.

Prof. Essumang has served on over 50 boards and committees at UCC from 2002 to date. He was the task team leader for Persistent Organic Pollutants (POPs)/National Implementation Programme (NIPs), Review and Update for the Assessment of Perfluorooctane Sulfate (PFOS)/PFOS Salts/PFOS inventory for Ghana. He has also been a reviewer for the Czech Republic Science Foundation since 2012 for the award of research grants for researchers in the Czech Republic. Prof. Essumang is the Editor-in-Chief of the Journal of Basic and Applied Sciences which is on the flagship journals published by UCC. He is a reviewer for several Elsevier Journals. He is also Ghana’s correspondent for World Library of Toxicology and Ghana’s representative of International Union of Pure and Applied Chemistry (IUPAC). He has won some international awards (IUPAC Young Chemist Travelling Award, Royal Society of Chemistry, U. K. Research Grant).