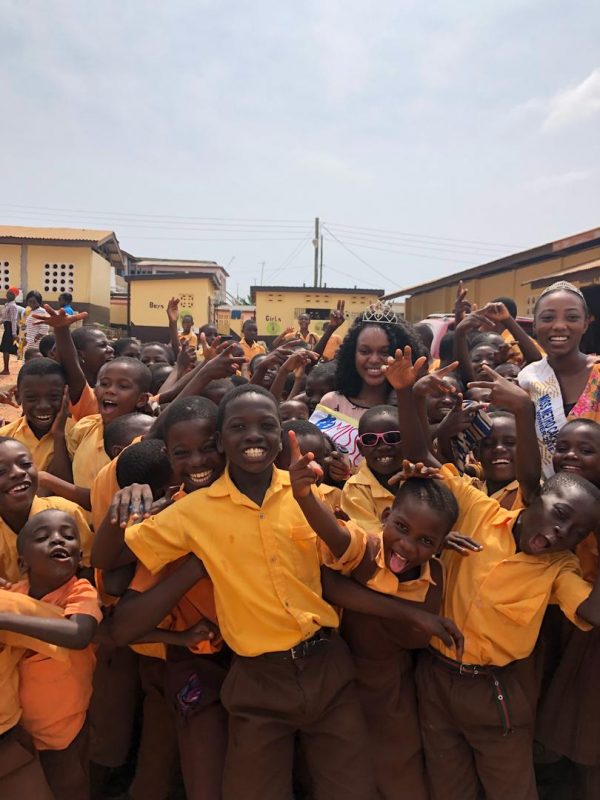 The current reigning queen of the University of Cape Coast’s beauty pageant, Miss UCC, Chika Austin Mbanaso has shared some asorted items with the pupils of Apewosika Basic School.

According to the beauty queen, it has been her dream for long to reach out to children who needed to be shown love and thus decided to leverage on her position as the current queen of UCC to put smiles on the face of the pupils.

Assorted Items including biscuits, ice creams, and toffees were given to the pupils who couldn’t hide their exitement.

Mis Austin said in an interview with choicism.com that “this donation had been a brain child since the beginning of the semester and as part of my project as Miss UCC I planned to reach out to kids who needed a touch on their affective domain”.

She added that she embarked on this project to help the kids tap into a place of arts that “no medicine can touch” but “enable them understand and change the way they see the world.

Ms Austin expressed her appreciation to the headmistress of Apewosika Basic School for receiving her and she encouraged the pupild to study hard to become great personalities in future.

The beuaty queen who doubles as an ambassador for the performing arts of the Music and Dance Department of UCC, disclosed that she’s hoping to execute a hair care project next year.

She stated that the project will be aimed at encouraging female students on the importance of hair care as the hair is one of the things noticed about people when meeting for the first time.