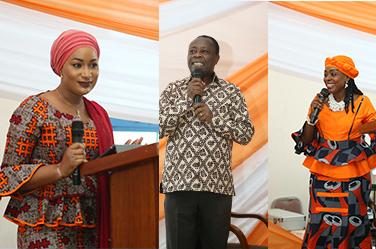 The Second lady of Ghana, Mrs. Samira Bawumia has advised female students of the University to broaden their horizon and acquire valuable skills that can make them competitive globally.

“The woman’s place is at the top and it is time we take up the challenging role not just in our schools and communities but in our society” she said.

The Second Lady said it had been acknowledged globally, that women play very important roles towards the development of their countries. She noted that in Africa and in some developed countries, women continue to face worse conditions such as gender inequality, domestic violence, societal pressures and all forms of challenges that limit their ability to reach their full potential.

She, therefore, encouraged the students “to dream big, make a difference in your communities, among your friends and wherever you find yourself.” “There are a lot of opportunities in the 21st century that were not available to our mothers and grandmothers,” she said.

“We cannot realize our aspiration without the right guidance; we need to get someone who will inspire us to rise up in life, “she told the students.

Mrs. Bawumia advised the students to seek opportunities for internships during semester breaks which would help them acquire experience to secure jobs after their education. She urged them to learn from other successful women saying “greatness is derived from lessons so take active lessons from the environment and what you see around you.

She told the students that they lived in a very fortunate era where there was advancement of technology and globalization. “This is the best time to take opportunities to solve problems of our time. With hard work, perseverance, selflessness, you can make it”, she concluded.

A legend musician, Akosua Agyapong said the 21st Century woman was a great asset to society. She said the “woman has a bright future which is of immense benefit to the nation, so don’t waste your life whiles in the university.”

Miss Agyapong said to be able to succeed as a 21st Century woman, they should identify where they wanted to place their destiny in the future. “if your destiny is with a man, you cannot be a woman of substance” she said.

She explained that the word woman represented a wise, organised, well maintained, adorable and neat personality.
Akosua Agyapong interspersed her address with some performance from her collection of songs to the admiration of the audience which kept Mrs Bawumia and the other dignitaries on their dancing feet.

The Pro-Vice-Chancellor, Prof. George K. T. Oduro, who chaired the function, said the history of Ghana would not be complete without proper reference to the woman.

“I have the notion that the challenge of corruption we are battling in this country particularly those relating to organisational management could be defeated if majority of women are at leadership positions” he noted.