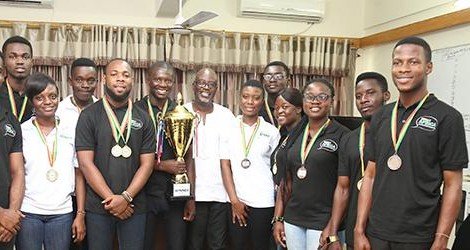 Impact Africa Debate Championship & Intercontinental Public Speaking Contest is aimed at bringing young leaders together, to exchange their cultures and shape their speaking skills as well as to groom the young to take up leadership on the continent.

Medals won by the students included;

Receiving the trophy, the Dean of Students Affairs, Prof. Koawo Edjah, commended the team for the sterling performance at the contest and the great honour they’ve done the University. He assured them that the Office of the Dean of Students would continue to support them to win more laurels in subsequent competitions. “This achievement is a motivation that you have made good use of the knowledge we have imparted unto you. You have recognised public speaking as your talent so you need to work and I can assure you that you will become great leaders in this country and beyond” he advised them.