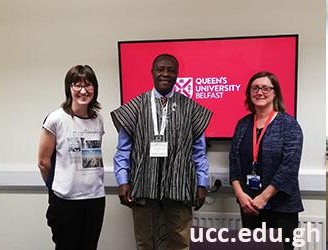 UCC to Get Centre of Excellence for Food Safety, Fraud and Research Centre, the First in Sub-Saharan Africa

A Memorandum of Understanding (MoU) has been signed between the Queen’s University Belfast (QU), Ireland and the University of Cape Coast for the establishment of a Centre of Excellence for Food Safety, Fraud and Research Centre to be hosted by the School of Agriculture.

The Centre which will be hosted in the School of Agriculture of the University of Cape Coast would be the first of its kind in sub-Saharan Africa with the core mandate of ensuring that food items produced in the country as well as those imported and exported are safe for human consumption.

This was disclosed by the Vice-Chancellor, Prof. George K. T. Oduro, who signed the MoU on behalf of UCC with officials of Queen’s University during a summit that brought together 650 participants from various organisations and academic institutions across the world, including the World Bank in Ireland. “When the MoU is operationalized, UCC will become the hub for building capacity in food safety, security and fraud research in sub-Saharan African” Prof. Oduro noted.

Speaking at the Summit, Prof. Oduro explained the importance of food security in Africa and the need for the establishment of the Centre to eradicate poverty and hunger on the continent and also ensure that the food produced was of high quality. He pointed out that there were food safety issues affecting sub-Saharan African including Ghana, however, there was lack of technology to addressing them, stressing that “The contamination is identified only when it gets to the consumer”

Prof. Oduro emphasised that “This makes the establishment of the Centre very innovative initiative which will project the University, especially when it is the first of its kind in Africa”.
He, therefore, indicated that UCC has a very functioning School of Agriculture with a strong focus on extension services through the support of Sasakawa International Foundation.

Reacting to Prof Oduro’s presentation, the Provost of the Faculty of Medicine Health and Life Sciences, Prof. Chris Elliot, expressed appreciation to UCC for sending a representative to the summit and also signing the MoU. He noted that “QU does not only select any university as partners for projects and once an MoU is signed, it must be translated into reality”.

Prof. Elliot who is also the founder of the Institute for Global Food Security in Queens University indicated that they carefully selected UCC after examining the programmes, and also interacted with Dr. Ernest Teye, a lecturer from the School of Agriculture, whose work had been well appreciated. He gave the assurance that they would do everything possible to ensure that the MoU became a reality.

Prof. Elliot also said that the MoU would not only be limited to the Centre of Excellence but extended to cover other Colleges, Faculties, Schools, Institutes and Departments in UCC. As a follow-up to the MoU, a delegation from QU would visit UCC to interact with Management and faculty in the various colleges to explore other areas for collaboration.

Prof. Elliot said Northern Ireland for some time now had not been opened to other regions adding “that makes it a prime initiative that will lay a solid foundation for sustained collaboration”.

According to Prof. Oduro, there were about 60 Nigerian delegates at the summit who expressed interest and volunteered to send their students for training when the UCC Centre of Excellence becomes operational.