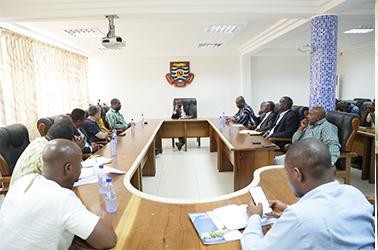 The Vice-Chancellor, Prof. Joseph Ghartey Ampiah, has received a team of investors led by the Deputy Minister of Trade and Industry, Mr. Robert Ahomka-Lindsay to discuss business opportunities for the University.

Explaining the purpose of the visit, Mr. Ahomka-Lindsay said he led the team to UCC to explore the possibility of securing a parcel of the University’s land for the establishment of an Automobile Assembling Company. He said it was the agenda of the Ministry to transform Cape Coast as the manufacturing hub of Ghana.

Mr. Ahomka-Lindsay introduced Afro Bas as the company that would be undertaking the project and indicated that “in about seven to eight months the site plan will be completed for work to begin if the discussions are concluded favourably”. He said the establishment of the company would open several doors of opportunities and partnership to the University in terms of joint research, sharing of knowledge, placement of students for practical and internships.

Afro Bas Trucks is a multipurpose company whose activities are heavily involved in logistics, transportation and haulage within the whole of Ghana and West Africa Sub-region.

The Deputy Minister of Trade and Industry said there were plans for the establishment of technology park with pharmaceutical research and production, indicating that “the Ministry is willing to source funds to partner UCC to create the Technology Park.”

Responding, the Vice-Chancellor said the University was opened for collaboration that would promote knowledge sharing and contributing towards economic growth. He said the University had made a lot of efforts to firm its relationship with industry adding that “We just launched our Industry and Innovation Unit and also had a maiden Innovation Fair and Engagement with Industry Players”.

Prof. Ampiah appealed to the Deputy Minister to create opportunities for the University to collaborate with organisations that would support the University with infrastructure and research activities. He also called on government to identify individuals with talents and invest in their creativity to the benefit of the nation.