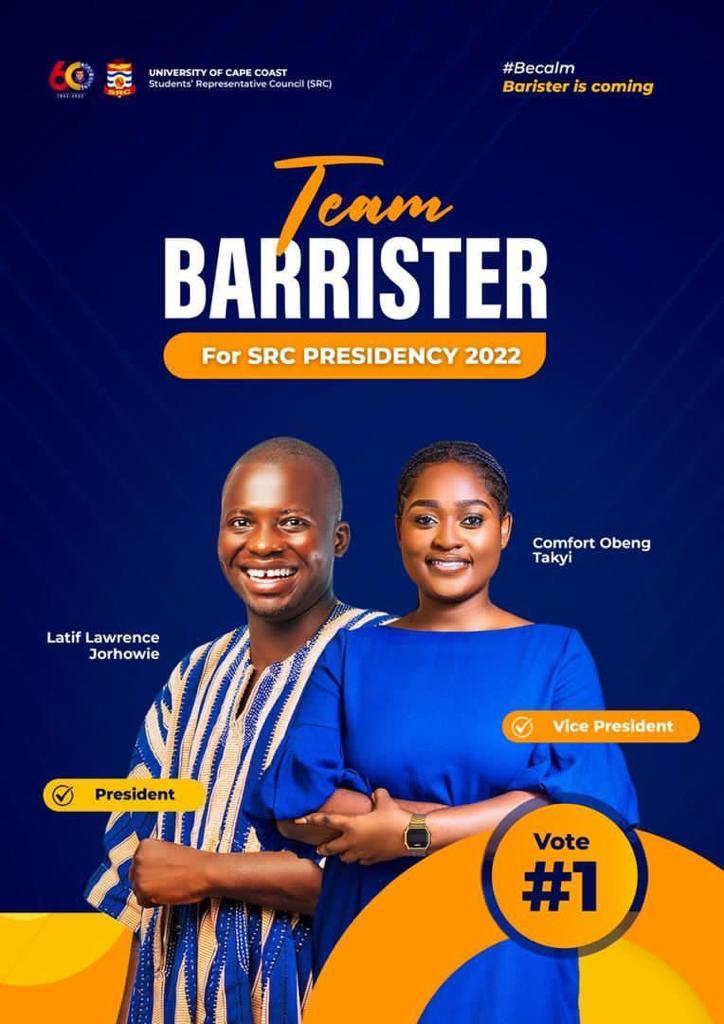 UCC ELECTIONS; Barrister conjures votes from Adehye to cement his victory as the next SRC president

Team Barrister has won the University of Cape Coast student representative Council elections which begun today, Thursday, 13 2022 in the morning from 10:00 am came to an end at 8:00pm with a lot of euphoria from students.

With regard to this, many thought that team Dependable will clinch Victory by amassing huge votes from Casford Hall and Adehye Hall, his strongest polling station. Unfortunately, it turned out that Team New Deal who is the past president of the Royals (Adehye Hall) amassed more votes at Adehye. This made votes expected to come in favour of Team Dependable, the Casfordian shared between him and the Royal.

However, chances were Team Barrister had the go ahead as he was able to close the gap to amass such huge number of votes in Oguaa Hall and SRC Hall to lead.

Therefore, report reaching Choicism media has it that Team Barrister won the UCC SRC/LOCAL NUGS 2022/2023 Elections with actual results of eight hundred and ninety-seven (897) votes with a percentage of 37.4% while, his strongest opponent trailed with seven hundred and ninety-eight (798) of 33.3%. The New deal came out with four hundred and forty-one (442) votes of 18.4%, and DE Advocate ended the marathon with a number of two hundred and sixty-four (264) votes with a percentage 11.0%, leaving 550 votes missing.
The Total valid votes count to 2,951 votes.

In view of this, it is indicated that Team Barrister used a number of one thousand and eighty-five (1,085) votes to exceed his opponent to clinch the victory.

Meanwhile, most students in an interview with reporter Joseph Eyison, after the elections told Choicism media to alert Team Barrister not to forget his promises made to students and should do as stated.

Also, a level 300 student said, “if he fails us then there would be a demonstration”.

All the same, other students are optimistic that Team Barrister will deliver and bring the change students need.

Published in Halls and News